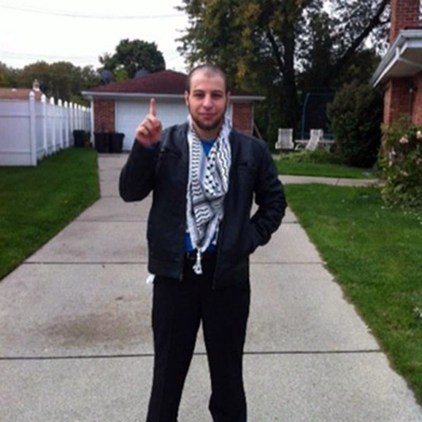 KHALIL ABU RAYYAN was a lonely young man in Detroit, eager to find a wife. Jannah Bride claimed she was a 19-year-old Sunni Muslim whose husband was killed in an airstrike in Syria. The two struck up a romantic connection through online communications.

Now, Rayyan, a 21-year-old Michigan man, is accused by federal prosecutors of supporting the Islamic State.

Documents released Tuesday show, however, that Rayyan was motivated not by religious radicalism but by the desire to impress Bride, who said she wanted to be a martyr.

Jannah Bride, not a real name, was in fact an FBI informant hired to communicate with Rayyan, who first came to the FBI’s attention when he retweeted a video from the Islamic State of people being thrown from buildings. He wrote later on Twitter: “Thanks, brother, that made my day.”

Rayyan, who had previously been arrested for having marijuana, is now charged with unlawful possession of a firearm and making a false statement to acquire a firearm.

Although Rayyan is not charged with terrorism, the FBI and federal prosecutors have treated his case as a national security concern, making numerous references in court filings and at a detention hearing to statements Rayyan made about the Islamic State and his supposed aspirations for violence.

Rayyan has pleaded not guilty to the federal gun charges, and his lawyers have asked the court to force the government to turn over all remaining communications between Rayyan and the FBI informant.

According to transcripts of conversations between Rayyan and the informant — which were made public for the first time this week — Rayyan had fallen in love with Bride and had even proposed marriage.

The transcripts show that the FBI informant initiated conversations about violence on several occasions, and when she did, Rayyan would tell her that he didn’t want to hurt anyone. In an online conversation on December 26, 2015, the informant asked Rayyan, using the Arabic word meaning this earthly life, “What do you want from this Dunya?”

“Honestly to get married,” he responded. “I think if I get married I will be happy. I’m just lonely sometimes. I want to start a family.”