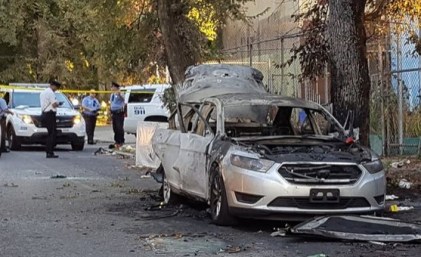 If the allegations of the victim and witnesses bears out then this is one of the most horrific incidences of Islamophobic hate crime this year. (h/t:J)

An explosive believed to be a firebomb has been thrown into a car – allegedly while the driver was still sitting inside.

It is also believed that the victim alleged the suspect shouted ‘There you go, Muslim’, before throwing the device into the vehicle.

The car has been almost completely destroyed by the suspected bomb after it set on fire .

It has been reported that the incident took place in North Philadelphia this morning at approximately 5am.

The video was recorded by a witness, going under the username @FeministaJones, who said: “Heard a huge explosion. Didn’t know what it was. Then heard a man yelling saying his skin was burning.