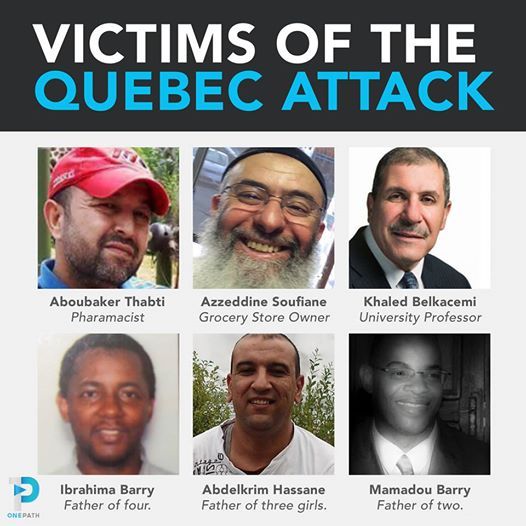 Trump was silent while a whole nation to our north mourned an unprecedented Islamophobic massacre. Much respect to Canada.

Nearly 5,000 mourners packed into a hockey arena in Montreal’s Olympic park for the funeral, while many more across Canada watched it on television.

For many in this mostly secular nation, the ceremony was their first glimpse of traditional Muslim funeral rites.

There were also prayers for the other three victims, who will be commemorated the next day in Quebec City.

Khaled Belkacemi, 60, and Abedlkrim Hassane, 41, both Algerian dual nationals, and Tunisian-born Aboubaker Thabti, 44, were shot dead, along with three other worshippers at a Quebec City mosque on Sunday.

“We are all family men who came to Canada to work and integrate into a multicultural society,” he said.

White flower wreaths were placed by the coffins, covered by the flags of the victims’ birth countries, where their bodies later would be transported for burial.

There has been an outpouring of support for Canada’s minority Muslim community in the wake of the attack, but also pockets of increased hate mongering.

At the funeral Catholics, Jews, Muslims and agnostics sat side by side, hugging each other and wiping away tears as verses of the Koran were read aloud.

“The whole nation has been shaken by this brutal and hateful attack, but in these dark moments our country has united and showed solidarity,” said Trudeau.

“(Say) no to violence, no to intimidation, racism and xenophobia,” said Quebec Premier Philippe Couillard.

To Canada’s 1.1 million-strong Muslim minority, he said: “Know that you are at home here.”