By Jerlerup on February 9, 2017 in Breitbart Watch, Feature, General

There are many similarities between antisemitism and Islamophobia: One is that political leaders of the world often have been accused of being secret “Jews” or “Muslims.” The intent is to smear them by using antisemitic or Islamophobic slurs. Words like “Muslim” or “Jew” to many are nasty words that imply that the person is an “unpatriotic traitor” or “terrorist.”

Modern and historical antisemitism and Islamophobia is often based on the myth that there is a global conspiracy to conquer the world: antisemitic myths about a global Jewish or Zionist conspiracy like the Protocols of the elders of Zion and Islamophobic theories of a Muslim takeover of the west such as the Eurabia myth. Different national leaders that are seen as a threat to the racists are either branded as “Jews” or “Muslims” or as quisling collaborators of each.

Of course, to all decent and sane human beings there is nothing wrong in being a Jew or a Muslim. A political leader that is a Jew or a Muslim is no different from leaders that are, for example, Christian or Atheists. The only thing that matters is what is in your mind and in your heart, not what religion or ethnicity you have.

But racists are not decent. For them calling someone Jew or Muslim has a specific purpose: to slander a person (and the group of people you hate). 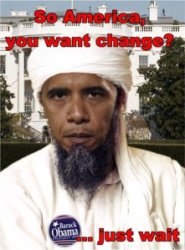 One typical example of this is how the current president of the USA, Donald Trump, has attempted to use the word “Muslim” as a slander against former President Barack Obama;  implying that Barack Obama is a Muslim.

The myth behind this Islamophobic slander is that Obama was not born in the USA. He has a “false birth certificate.” He was born in Kenya as a Muslim, it is claimed. He was therefore never a legitimate president. To top it all off he was a part of the conspiracy to make the Muslims conquer the USA. Obama was a security risk since “all know that Islam and terrorism are connected.”

Obama was supposedly brought into this country as a little baby, a kind of Muslim baby-agent and was later raised with the intent to destroy the USA and the west, according to this myth.

“He doesn’t have a birth certificate. He may have one, but there’s something on that, maybe religion, maybe it says he is a Muslim.”  ”I don’t know. Maybe he doesn’t want that.” (Trump to Fox News 2011)

You can read more about this myth at Snopes or google it.

Trump did not invent this myth. He picked it up from the nether world of right-wing “fake-news” churners: Pamela Geller, Alex Jones or Breitbart. His security adviser Steve Bannon has for a long time spread the myth that Obama is a radical Islamic “mole” via Breitbart and in other venues.

If you search Breitbart you can see that Breitbart claims that “Obama is a Muslim” that wants to “eliminate the USA” and that the job of Obama was to “promote Islam.”

Search on Breitbart and read it for yourself.

So where does this myth originate? In this case it is not so hard to find the origin. Trump and Bannon use the slogan “America First.” That reveals the origin of this myth: the pro-Nazi movement of the 1930s and 1940s.

This Islamophobic myth has an antisemitic origin.

America First was an antisemitic movement that had the aim to prevent USA from entering the war against nazi Germany. The movement promoted the idea that the USA should cooperate with the Nazis. The movement used anti-Jewish propaganda extensively and slandered Franklin Delanore Roosevelt in many ways. For them FDR was a traitor that worked with the British and the Jews. Many went so far as to say that FDR was a Jew. In order to slander him, much in the same way Obama was in his tenure.

The myth is still widespread among modern antisemites on the internet. But it is old. It was already in use during the beginning of the 1930’s by friends of Henry Ford. In 1939, a German professor, Dr. Johann von Leers, published an analysis of the ancestors of president Roosevelt and came to the conclusion that he was a Jew. His mother was called Sarah Delano and was said to have Jewish ancestors back in the 1600’s, according to this myth the family stayed Jewish “in secret” from that point on.

One “evidence” of his Jewish origin that was presented was that FDR married a cousin. According to standard myths about Muslims and Jews they often marry their cousins; FDR was a victim of this myth.

Another “evidence” was that Roosevelt allowed European Jews that fled the Nazis move to the USA. FDR is trying to make the USA “Jewish” by letting the refugees enter the country, the antisemites claimed. In a similar way Breitbart today spreads the lie that Obama was a “Muslim mole” because he allowed Syrian and Iraqi refugees to enter the USA; he was trying to “Islamify/Muslimify the USA.”

FDR himself knew exactly what was going on.

“We must especially beware of that small group of selfish men who would clip the wings of the American eagle in order to feather their own nests.” (FDR about America First.)

Antisemitic hatred against other presidents

Other U.S presidents have been victims of antisemitic slanders, as well as anti-Catholic slanders.

What frightens me is how words like “Jew, “Muslim” and even “Catholic” through the years has been used to slander American presidents. What scares me is how racists are blaming all the evils in the world on groups of people, like Jews or Muslims.

For evidence of the hatred against Obama in the “alt-right” movement, do these searches on Google.