By Jerlerup on February 12, 2017 in Breitbart Watch, Feature, General

Is the hatred of Muslims and Trump’s “Migration Ban,” consistent with Catholic values? That is something Breitbart writes much about, and for them the answer to these question is yes. Several of their leading editors and journalists are Catholic, like Milo Yiannopoulos and Steve Bannon.

But Catholics should remember that 90 years ago racists, led by the Ku Klux Klan, demonized the Catholic Church with a rethoric similar to Breitbart today. As for the “Migrant Ban,” Catholics were partially victims of the “Migrant Bans” of 1921 and 1924.

There are many similarities between Breitbart’s hatred of Muslims today and the hatred of Catholics in the history of the U.S.A.

“Restricted immigration is not an offensive but purely a defensive action. It is not adopted in criticism of others in the slightest degree, but solely for the purpose of protecting ourselves.” Coolidge 1924 Republican convention.

“American institutions rest solely on good citizenship… America must be kept American. For this purpose it is necessary to continue a policy of restricted immigration… Those who do not want to be partakers of the American spirit ought not to settle in America.” Coolidge December 6, 1923 message to Congress

We will look at the similarities between anticatholicism and Islamophobia in a series of articles here on Loonwatch. There are many similarities. In this article we shall look at the 1924 migration ban that restricted the immigration from Catholic countries in southern Europe, and the surge of anti-Catholic hatred in U.S.A in the 1920s.

Breitbart and the Catholic church

Breitbart is writes a lot about the Catholic church. Among its editors and journalists are several Catholics. Milo Yiannopoulos and Steve Bannon are both Catholic. But the relationship between Bannon and the U.S. Catholic community is not good. U.S. Catholics are too positive on immigration, Bannon believes.

Bannon allegedly said on March 8, “I understand why Catholics want as many Hispanics in this country as possible, because the church is dying in this country, right? If it was not for the Hispanics. I get that, right? But I think that is the subtext of part of the letter, and I think that is the subtext of a lot of the political direction of this.”

Another Breitbart contributer is Thomas D. Williams. He is a professor of ethics and Breitbart correspondent in Rome. He is Catholic. He has frequently written about Muslims as a threat, and is defends the Migrant Ban, even citing saints to defend it. 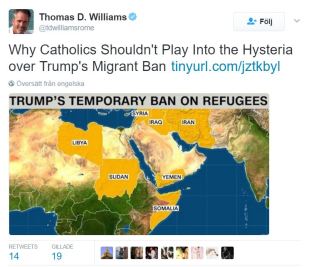 But he is wrong. Catholics should know better than to spread hatred against Muslims and supporting “Migrant Bans” that according to Donald Trump have the purpose to limit the number of Muslims that can enter the U.S.A.

Catholics have themselves been victims of similar “anti-Catholic” Migrant Bans.

The 1924 Immigration Act was the result of several years of propaganda to restrict immigration from “undesired” parts of the world. Already in 1921 restrictions had been instituted with the Emergency Quote Act.

Following the War, the popularity of immigration restriction was at an all-time high. In response, Congress passed the Emergency Quota Act in 1921, which established fixed limits on the number of people emigrating to the U.S. from any one country. The 1921 Act established the quotas based on 3% of the number of immigrants from each national origin group based on the 1910 census, which reflected fewer numbers of immigrants from Southern and Eastern Europe than the time in which the act was under debate. In fixing the quotas based on the 1910 numbers, Congress hoped to keep out the supposedly inferior races, such as Italians, Poles, and Slavs.

In 1924, the Johnson-Reed Act extended the quota system in an even more discriminatory process, changing the basis of the quotas to the 1890 census, when even fewer Southern and Eastern Europeans had been present in the United States. The new legislation thus discriminated against Catholic immigrants, the majority of whom came from the “undesirable” regions of Europe. The quota system established by the 1924 Johnson-Reed Act remained in place for nearly three decades.

The Catholics were worried. Even if Catholic immigration was not entirely stopped (Immigration from Latin America was unrestricted, and from Ireland), they knew that they were targeted. Anticatholicism was widespread in the U.S.A. and the Ku Klux Klan had many followers in the political parties, especially the Democratic Party. 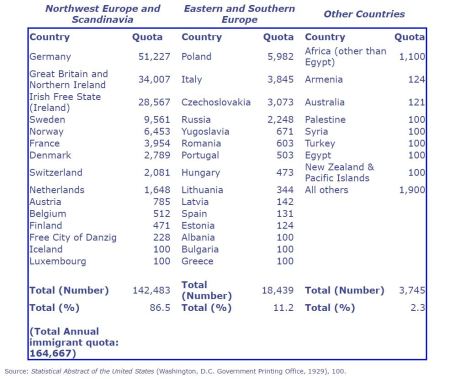 Migration from Protestant countries was encouraged while migration from Catholic ones in southern Europe was restricted, as we can see above in the figures of the immigration after 1924. That was hardly a coincidence. Most historians view the 1921 and 1924 immigration restrictions as anticatholic. Most informed Catholics do the same.

“Catholics are criminals and terrorists”

Anticatholicism has a long and violent history in the U.S.A. Already John Jay instituted a “Migrant Ban” in New York State. It was Jay who wrote the Continental Congress’s 1774 address to the people of Great Britain. The Congress wanted a “Migrant Ban” to stop Catholics.

“Nor can we suppress our astonishment, that a British Parliament should ever consent to establish in that country a religion that has deluged your island in blood, and dispersed bigotry, persecution, murder and rebellion through every part of the world.” (John Jay 1774)

In the mid 1800s there were plenty of anticatholic riots where people were brutally killed. The violence was aimed at Catholics, expecially the Irish, that were seen as bloodthirsty parasites and rapists, by many at the time; racists feared a “Catholic takeover of the U.S.A.” Then there was the political party called the “Know Nothing” in the mid 1800s. Know Nothing and the influential American Protective Association in the end of the 1800s sounded much like Breitbart today. This is the APA oath:

“I do most solemnly promise and swear that I will always, to the utmost of my ability, labor, plead and wage a continuous warfare against ignorance and fanaticism; that I will use my utmost power to strike the shackles and chains of blind obedience to the Roman Catholic church from the hampered and bound consciences of a priest-ridden and church-oppressed people”.

Anticatholicism increased in the early 1900s. Catholics were seen as violent terrorists, as well as adherents of a dangerous religion that allegedly demanded that you give up your individual freedom. This article in The Menace from 1915 is typical for the anticatholic hatred at the time. 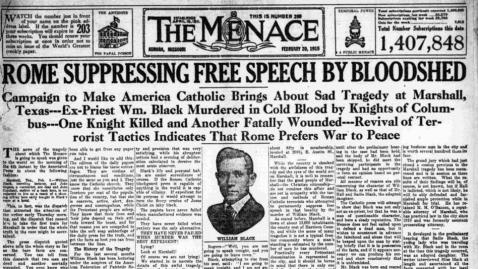 At this time the Ku Klux Klan restarted their operations in the U.S.A. In 1915 it was refounded. KKK is today remembered mainly because of its hatred against Blacks and Jews. But it was equally anti-catholic. It was responsible for much of the anticatholic hatred that plagued the U.S. in the 1920s.

Its anti-Catholic and anti-Jewish propaganda sounds very much like Breitbart today. According to the Clan the Jews and the Catholics had dangerous religions and cultures that threatened the western civilization. The Catholics were terrorists that bred like rabbits and wanted to conquer the world and slaughter all protestants.

In the Principles and Purposes of the Knights of the Ku Klux Klan you can read: 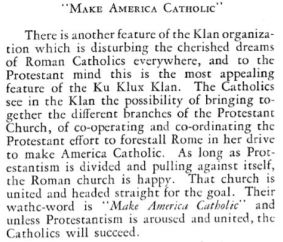 The myths about the “islamization America” today has its historical roots in the myths about “Jewish take over of USA” and the myth that Catholics wanted to “make America Catholic”, that the KKK spread in the 1920s.

It is perhaps no coincidence that the “migration ban” came in 1924 when Coolidge was president. Many believe that he was a member of the Ku Klux Klan.

Coolidge was a complex person. On one hand he did NOT denounce the Ku Klux Klan when the opponent in the Democratic party, J.W. Davies, did so in the presidential election 1923. He refused and that made Catholics scared. Davies demanded that Coolidge should do so, but he did not. Coolidge wanted the support of the white people in the Southern U.S.A. On the other hand he did portrait himsels as a “friend of the assimilated Catholics” and defended their right to be citizens. He differentiated between the unassimilated and the assimilated ones.

The 1924 “Migrant Ban” can be seen as a compromise. The KKK partly won, in that migration from the most “dangerous” Catholic and Jewish areas was restricted. But the Irish and Latinamerican immigration continued. 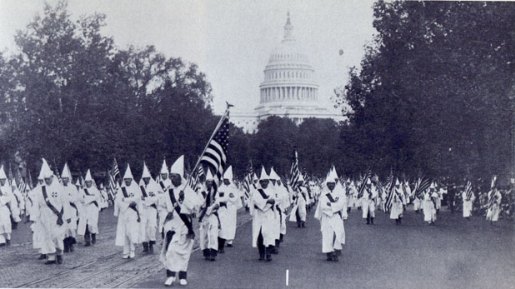 In 1928 Al Smith was the first Catholic to run for President. He ran on the Democratic ticket and was defeated, due to the anticatholic ferment at the time. His critics defended the KKK and claimed that he was a part of a secret plot to conquer and destroy the USA:

The Roman Catholic edict has gone forth in secret articles, “Al Smith is to be made President.” Doctor McDaniel said: “Of all countries the Pope wants to control this country.” “The Knights of Columbus slogan,“ said Doctor Chapman, . . . ”is make America Catholic.” Here they tell you in their book that they will force the propaganda of Protestants to cease, they will lay the heavy hand of a Catholic state upon you and crush the life out of Protestantism in America.

In future articles we will expand on this topic. When John F. Kennedy was elected there was a surge in anticatholicism again that is well worth looking at too.

Catholics SHOULD be worried

The rhetoric Breitbart uses is often the same as the one against the Catholics. The same myths, the same, loose claims, the same ideas about “their takeover”, the same demographic lies, the same claims that “they are prone to be violent and are terrorists”, the same fear of a “Muslim” or “Catholic” president.

Considering the “Migration Ban” in the 1920s, the Catholics in the U.S.A should be worried, very worried about the ban; and about the hatred Breitbart spreads.