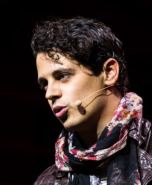 Milo Yiannopoulos, senior editor at Breitbart, defends Paedophilia! His claim to be Conservative champion of homosexual rights is untrue. He is NOT. He wants the gays to “get back in the closet”, he hates trans-people and defends paedophilia.

An account called the Reagan Battalion on Twitter revealed today that Milo defends paedophilia. He believes it is “ok” to have sex with 13 year olds.

“You know people are messy and complex and actually, in the homosexual world particularly. Some of those relationships between younger boys and older men, that sort of coming of age relationships.”… The relationships with those with older men have helped those young boys discover who they are. And give them security and safety, provide them with love and reliable and sort of a rock.”

When questioned if he means sex with children he answers, no, only with “sexually mature” young people like “13-year olds,”

Quotes are taken from here.

He claims that it is not paedophilia for an adult to have sex with 13 year olds. He somehow believes they are “sexually mature.” But that is what it is: paedophilia.

The original dialogue can be found on youtube: here! In full. The part where he talks about sex with 13 year olds starts at 58:30. The quote on 13-year olds is found at 1:05:05. This not the first time, he has been quite consistent in this opinion having defended adult sex with 13-14 year olds on other occassions.

But don’t make the mistake of believing that the fact that he is for sexual relations between boys and adults mean that he is for homosexual rights. He is not! And… VERY few homosexuals defend paedophila!

Lets look at the claim that Milo is somehow an advocate for HBTQ-rights. He is homosexual, but that does not prevent him from hating Gays almost as much as he hates Muslims.

Milo does not only want to kick out Muslims from the U.S.A, he believes that Homosexuals should be deprived of their rights too, so that America can fight Muslims (!), by breeding more children.

The Muslims are breeding like rabbits and having a lot of children, while the Western world is having fewer children. Therefore gay men, that are intellectually superior (!),  should “get back into the closet,” marry women and, help save Western civilization against the Muslim threat. That is how Milo views the world.

He believes that the 1950s, when homosexuals were jailed and persecuted in the Western world, was a good time, when Homosexuals were “in the closet.” Milos even defend the Russian homophobic president Vladimir Putin by stating that he is right when banning homosexuals.

Online photo blogs from San Francisco’s notorious Folsom Street Fair will do nothing to dispel Vladimir Putin’s hunch that the west has become a decadent mess. Frankly, I would have been less ashamed to be gay in the days when being gay was something to be ashamed of. Gays were classier when they were worried about being queer-bashed.

Children with two dads or two moms have a “cruel” childhood. “Children raised in gay households are more likely to suffer mental problems” and lesbians “are famous for kicking the shit out of each other.” Hardly a positive view of homosexuality.

Lets look at one of the articles Milo has written.

The endless celebration and mollycoddling of homosexuals in the media has transformed the genteel, camp rightsists of the 1950s into brash, glitter-drenched Pride queens. If for no other reasons than manners and aesthetics, we ought to think about shoving the next generation back into Narnia…

In in the 1950s, gay men would “live a lie,” get married and have kids. They’d let off steam in dark rooms and bathhouses. That’s not happening any more: the gay rights movement has liberated queens from societal expectations, so they shack up with their boyfriends and either don’t have children, or adopt…

When I express views like this, I’m sometimes called a reactionary. People say I want to go back to the 50s. And they’re right…  Forcing gays back into the closet also solves the problem of what happens to children when they have two dads or two moms. Children raised in gay households are more likely to suffer mental problems, more likely to end up gay themselves and, if raised by lesbians, almost certain to witness domestic abuse.

So the good news is?

The good news is that gay rights are in the minority, globally speaking. China, India and most of all Russia proudly celebrate the importance of the nuclear family.

You can hardly blame them. Online photo blogs from San Francisco’s notorious Folsom Street Fair will do nothing to dispel Vladimir Putin’s hunch that the west has become a decadent mess. Frankly, I would have been less ashamed to be gay in the days when being gay was something to be ashamed of. Gays were classier when they were worried about being queer-bashed.

It’s also worth considering the fact that the entire Muslim world is virulently homophobic, so men there continue to reproduce like rabbits….

I hate to exaggerate, but you might say that the future of the West sort of depends on us faggots leaping back in the closet and churning out a few kids.

Muslims should be kicked out of the U.S.A and persecuted, homosexuals should return into the closet and queers should be “bashed.” There is no homophobia or racism against Muslims in the U.S.A. But paedophilia with 13 year olds should be legal. That is how Milo views the world.

Milo often attacks Muslims for being homophobic. But he NEVER attacks his own church, the Catholic Church. Quite the opposite, he claims Christians, as “opposed” to Muslims, are compassionate to homosexuals.

What does that tell us about Milo Yiannopoulos?

Well, Milo believes there is no homophobia any longer in the USA and gets so angry when he hear people speak about it that it makes him want to go out and “bash queers”(2:40). The gentle loving gay “bashing” homosexual Milo? Donald Trump and Steve Bannon have strange friends, indeed!