By Jerlerup on March 7, 2017 in Breitbart Watch, General 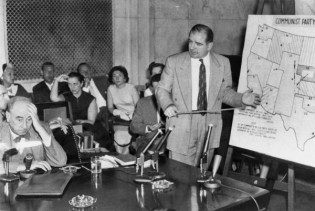 Have you heard of Senator Joe McCarthy? President Donald Trump and Steve Bannon have. Joe McCarthy led a witch-hunt against Communists in the 1950s. Many were falsely accused of being Soviet agents by him. What is scary is that the main advisor to the president, Steve Bannon believes McCarthy was right in, and a good guy. And as for Trump, he used to have Roy Cohn, McCarthy’s chief counsel, as his lawyer and mentor in the 1970s.

You probably heard the rumors that “Islamists” and “the Muslim Brotherhood” have infiltrated the US government.

If you look at those that spread the rumors, such as Breitbart, you can see that they almost never have any evidence for that claim. The accusations are usually guilt-by-association or what is sometimes called “connectos”.  That is: someone was a member of X that collaborated with Y that was a member of Z that had a founder that liked the Muslim Brotherhood. Loose links and connections between people and groups are important tools in journalistic and intelligence investigations, but has to be confirmed by other kinds of evidence.

The lack of normal procedures to verify the claims and hypothesis makes it possible to blame ANY Muslim, and any defender of Muslim rights, of being infiltrators and extremists.

The accusations that “The Muslim Brotherhood” and Islamists, are infiltrating the government is a witch hunt. Real radical “Islamists” and innocent Muslims are lumped together as one, and accused without substantial proof.

CNN recently reveled that Steve Bannon defended Joe McCarty in 2013. He compared the “Communist threat” in the 1950s to the “Muslim threat” today, citing the need for similar methods as Joe McCarthy used.

While interviewing the conservative author Diane West, Steve Bannon criticized the idea that Joe McCarthy, and the “House Un-American Activities Committee” (that led the investigation about Communists) were traitors.

“Today in modern pop culture, you know they call Ted Cruz the Joe McCarthy — if you want to think of who devils are it’s Ronald Reagan and those who name-names at the House Un-American Activities, the Hollywood Ten are heroes right?” Bannon said. “Alger Hiss is a hero, right? Richard Nixon’s a villain? Joe McCarthy is a villain. Your book makes very plain that these guys were right. The place was infested with either traitors that were on the direct payroll of Soviet military intelligence or fellow-travelers who were kind of compliant in helping these guys get along. I mean, there’s absolutely no question of it. How has pop culture so changed it that white is black and black is white?”

Steve Bannon linked the defence of Joe McCarthy to the alleged “Muslim” threat today as CNN revealed. He referred to The Muslim Brotherhood as an example of an present-day “infiltration” of the USA by fifth-columnists, similar to “Communist” infiltration.

“…dramatic influence campaign going around with the Muslim Brotherhood”

And Bannon and West both claimed that Muslims are trying to conquer the USA,

“Our diminution, our stunted mentality, actually makes us perfect candidates for being conquered by jihad, conquered by Islam, made into dhimmi, which is of course the people who live, Christians and Jews who live under Islamic law,” West said. “We are silent.”
“Under the religion of peace,” Bannon replied.
“Under the religion of peace,” West agreed.

This should come as no surprise to anyone. Breitbart, that Bannon headed, has defended Joe McCarthy in multiple articles.

The problem with Joe McCarthy, and his collaborators in the 1940s and 1950s, like his sidekick Roy Cohn, was NOT that they wanted to stop Soviet Communism, or that they perceived Communism as a threat. That was understandable. The Soviet Union and Communism was a threat. Tens of millions of people had been slaughtered inside the Soviet empire, and they were aggressively recruiting spies and agents inside the USA. The problem was HOW they did it.

The “McCarthyists” defined any Americans that they did not like as “probable Communists” or so-called “useful idiots”, that means: Communist sympathizers. They did not only target members of the Communist party, they targeted critics of American politics, social reformists, antiracists, socialists, homosexuals and Atheists too. They were all a part of the “plot”.

McCarthy and Roy Cohn, as well as the FBI director J. Edgar Hoover, are well known public figures who promoted these kinds of witchhunts but they were not alone.

“It’s a Wonderful Life”, one of the most beloved movies of all times, that airs on many networks every Christmas, was regarded as “Atheist and Communist propaganda”. Actors like Charlie Chaplin were publicly accused of being un-American Communists and had to flee the USA due to the persecution. And the accusers never presented real evidence to the public. The “evidence”against Charlie Chaplin was that he had been critical to aspects of the American system in his films.

“The FBI worried that Chaplin’s Tramp films functioned as anti-Capitalist agitprop. When Chaplin in Modern Times depicts the dehumanizing zaniness of the assembly line, into which the Tramp himself falls like a helpless waste product, is he not making a pointed criticism of American industry? Chaplin added fuel to the fire when he vocally criticized a return to free market principles after the recovery of the Great Depression: “I don’t want the old rugged individualism…rugged for a few, ragged for many.”

McCarthy once publicly talked about a list of 209 Communists at the State department. But he did not provide any evidence for the accusations.

“Speaking before the Ohio County Women’s Republican Club in Wheeling, West Virginia, Senator McCarthy waved before his audience a piece of paper. According to the only published newspaper account of the speech, McCarthy said that, “I have here in my hand a list of 205 [State Department employees] that were known to the Secretary of State as being members of the Communist Party and who nevertheless are still working and shaping the policy of the State Department.” In the next few weeks, the number fluctuated wildly, with McCarthy stating at various times that there were 57, or 81, or 10 communists in the Department of State. In fact, McCarthy never produced any solid evidence that there was even one communist in the State Department.

Despite McCarthy’s inconsistency, his refusal to provide any of the names of the “known communists,” and his inability to produce any coherent or reasonable evidence, his charges struck a chord with the American people. The months leading up to his February speech had been trying ones for America’s Cold War policies. China had fallen to a communist revolution. The Soviets had detonated an atomic device. McCarthy’s wild charges provided a ready explanation for these foreign policy disasters: communist subversives were working within the very bowels of the American government.”

On another occasion there was a trial against a lieutenant in the Air Force Reserve, Milo Radulovich, in which the evidences against Milo was presented in a sealed envelope. Neither Milo nor his lawyer were allowed to look at these hard core “facts”, and “evidences”. Instead the court viewed the fact that Milo, an immigrant from Yugoslavia, read Serbian papers, as “proof” of him being an agent of the Soviets.

If you were critical of McCarthy you were accused of being a Communist too, as Edward R. Murrow famously experienced. He was a journalist in 1953 who investigated the trial against Radulovich and criticized it: that made Murrow a “Communist” in the eyes of McCarthy.

To this Murrow answered:

We must not confuse dissent with disloyalty. We must remember always that accusation is not proof and that conviction depends upon evidence and due process of law. We will not walk in fear, one of another. We will not be driven by fear into an age of unreason, if we dig deep in our history and our doctrine, and remember that we are not descended from fearful men.[28]

Those who defend McCarthy and McCarthyism today say that they DID hunt down some hundred Soviet agents and claim that was a good thing. Yes, they did. But they destroyed the lives of thousands of innocent people in that process.

The end NEVER justifies the means.

Steve Bannon isn’t the only one with connections to McCarthy and McCarthyism. Donald Trump, once had Joe McCarthy’s main advisor, Roy Cohn, as his own advisor, mentor and lawyer in the 1970s.

With that in mind we should look out, McCarthyism is once again on the rise.

Radical “Islamism,” like ISIS and Al Qaeda is a threat. And there are activities by radical “Islamist” fundamentalists, outside their ranks, that are as well. But the end does not justify the means. It never does!

Scare stories are spread globally about “Islamists” that infiltrate governments, and “The Muslim Brotherhood” is almost always cited as the “source” of this infiltration. If you look at the claims there is almost never anything that even remotely resembles evidence about this “plot”. And even when someone tries to give evidence for the “plot,” the evidences is always vague: someone wore a hijab, someone pointed with a shahada finger, someone is a member of an organization that someone claimed is a part of the Muslim Brotherhood, someone is a Muslim and a political activist…

That, my dear readers, is McCarthyism. It is “fake news”, Islamophobia, and the methods of Joe McCarthy. Please remember the words of the late Edward R. Murrow: “We must remember always that accusation is not proof…”