Did Algerian President Houari Boumedienne say in 1974 that he wanted Muslims to conquer Europe by migration and producing Muslim babies?

If you follow what Islamophobes write on the internet you will often see a quote attributed to Houari Boumedienne that allegedly proves the secret “Muslim conspiracy” against the West. It is claimed that he held a speech at the U.N. in 1974 where he said:

The quote is used to make people believe in a conspiracy to destroy and enslave Europe, and to make people scared of immigration and Muslims. (You can see how it is used on the Jihadwatch website.) A quick search on google reveals hundreds of thousands of citations in English alone. All with the intent to “prove” that “the Muslims” are waging a “Demographic Jihad”, against the western world.

On Wikipedia you can see that others have tried to locate the source to no avail.

When you contact the United Nations they say that he only gave ONE speech to the U.N. in 1974 and that speech is a famous anti-colonial speech. If you read that ONLY speech he made there that year nowhere does he mention a demographic jihad against the west. The closest you get is his warnings of tensions between the developed and undeveloped world due to economic differences. 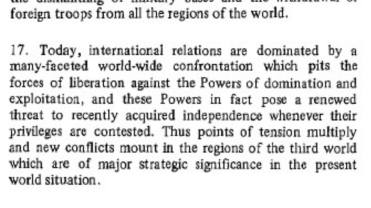 To paraphrase the famous Mythbusters, this myth is certainly busted!  But what is its origin?

The origin of the myth?

The quote is used as a part of the so called “Eurabia myth”. According to the Eurabia theory the Muslims and their collaborators in Europe agreed in the early 1970s to cooperate. The elite in Europe agreed to take in immigrants in exchange for oil, and thus to  Islamize and Arabize Europe. Wikipedia notes:

“The concept was coined by Bat Ye’or (pen name of Gisele Littman) in the early 2000s and is described in her 2005 book titled Eurabia: The Euro‐Arab Axis. Europe, Ye’or argues, has surrendered to Islam and is in a state of submission (which she referred to as dhimmitude) in which Europe is forced to deny its own culture, stand silently by in the face of alleged Muslim atrocities, accept Muslim immigration, and pay tribute through various types of economic assistance. According to the theory, the blame rests with a range of groups including communists, fascists, the media, universities, mosques and Islamic cultural centers, European bureaucrats, and the Euro-Arab Dialogue.”

The myth about the demographic bomb is central in the Islamophobic propaganda. Not long ago the same thing was claimed about the so called “Catholic ideology” (The haters claimed that Catholicism were not a religion, it was an ideology.)

In the anti-Catholic propaganda last century you can find exactly the same myth about the demographic bomb.

Today anti-Catholic myths are not as widely spread. But as late as the 90s there was still lots of discussion about the “global conspiracy to make the world Catholic”. Anti-Catholics claimed that the European Community was a creation of the Pope: through the EU, Catholic southern Europe would dominate and slowly conquer the Protestant North through the “demographic bomb” and through politics. In Southern Europe they gave birth to more children than in the north and slowly Europe would become Catholic. 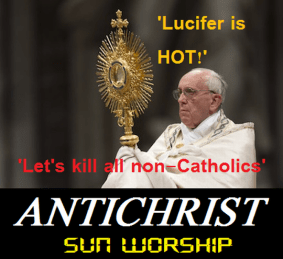 This was way before the internet. I am talking about the 50s, 60s, 70s, and up to the 80s. Racists that today whine about Muslims whined about Catholic Poles and agents of the Pope. (Some remnants of the anti-Catholic scare stories can still be found online. There is a website dedicated to the anti-Catholic and anti-Irish politician Ian Paisley that can be studied for this purpose.)

After some time it became obvious to most people that Catholics were not some kind of  bloodthirsty monsters that ate children. Thus: the myth faded and was replaced by myths about the Muslim invasion, accompanied at times with ideas that Catholics or Jews are behind it.

And yes, in the same way as the Jewish and Catholic religions were called an “ideology” the islamophobes called Islam an “ideology”.

There is still lots of racist anti-Catholic propaganda on the internet but the demographic aspects of the hatred has disappeared. It is a thing of the past. Today, instead, the Muslims are said to be the “demographic threat” to the Western World. Thus Islamophobes invent and spread fake myths about a “Muslim conspiracy. Like the 1974 Houari Boumediene U.N. speech.