Hatred against Jews and hatred against Muslims have a lot in common. One thing in particular is that throughout history Jews and Muslims have been accused of being prone to criminality, rape and violence. The Nazis in the 30’s did so and many antisemites still today spread the lie. The exact same kind of lies are spread about Muslims.

You have all heard the Myth about the aggressive Muslim: the “terrorist”, the “criminal”, the “rapist”, the person that “inherently is prone to violence” just because he is Muslim.

This myth has its origin in classical antisemitism. I wrote about one part of the myth earlier this year: “are Muslims Rapists“. The slander about “aggressive” and “criminal” Muslims has the same origin.

Nicolai Sennells, a Danish psychologist, is often referred to as the main “expert” on this alleged  “Muslim aggressivity”. In Jihadwatch some years ago he claimed:

In Muslim culture, anger is seen as a sign of strength. To Muslims, being aggressive is in itself an argument and a way of gaining respect. But we should not be impressed when we see pictures of bearded men hopping up and down, shouting like animals and shooting in the air. We should take it for what it is: the local madhouse passing by…

In Western culture, self-confidence is connected with the ability to meet criticism calmly and to respond rationally. We are raised to see people who easily get angry when criticized, as insecure and immature. In Muslim culture it is the opposite; it is honorable to respond aggressively and to engage in a physical fight in order to scare or force critics to withdraw…

When the racists reports about “Muslim violence” they all do the same. They take reports about things that one Muslim or a small group of Muslims have done, or allegedly have done, and extrapolate it on all Muslims. Islam and “Muslim culture” were “responsible” for the individual crime, it is claimed. The Muslim is demonized and people are tricked to be afraid of him or her.

Thus: to be a Muslim is an accessory to murder, violence, rape and criminality.

“To be a Jew is an accessory to murder, violence, rape and criminality”. That is what the Nazis in the 1930s claimed and what antisemites of all times have claimed. The nazis did the same as the islamophobes today: all Jews and Jewish culture were blamed for the things a few had done or was claimed to have done.

By now you might ask whether a Muslim or a Jew has ever raped a woman, or if there are no aggressive or criminal Muslims or Jews? Of course there are individual Muslim rapists, thiefs, thugs and murderers, as well as there are such among Trump supporters, among farmers, Americans, Christians, Russians, carpenters, farmers and stamp collectors.  But if you claim that Muslims, Jews, Trump supporters or Christians or farmers are rapists or aggressive thugs you are spreading a dangerous lie.

According to Breitbart there is a “Muslim Rape Culture” and that Muslims are “violent” The Nazis spread the same lies about Jews in the 30’s, as Breitbart and others does today in respect to Muslims, and claimed that there was such a thing as “Jewish Rape Culture” and that Jews were “violent”. The German magazine Der Sturmer was especially famous for spreading these kinds of slanders and its editors were put on trial after World War 2, at Nuremberg.

The Jew was  demonized and people were tricked to be afraid of him or her.

In the picture below, from Der Sturmer,  you can see the satanic Jewish “snake” that is seen raping a woman, and in the background you can see the Talmud. The headline deals with legacy-hunters, also implying that Jews try to “take over” Germany. The text on the bottom of the page says: “the Jews are our unluck”. 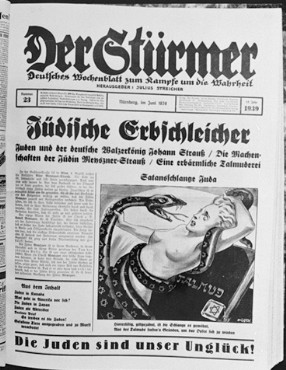 The myths about the violent Jews and Muslims has often been based on sex. Der Sturmer reported much about “Jewish sex crimes”. The example below is from Der Sturmer 1927. According to the article, an American Jew has raped and abused a German woman in Ohio. “Defamation of the Race in America” is the headline. The implied message is that “all Jews are like that.” 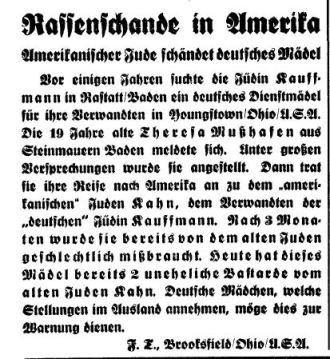 Here are two other examples from 1936 and once again Der Sturmer. About criminal cases that had to do with fraud. Der Sturmer combined violent articles about how Jews and Jewish holy books were inciting the Jews to violence with news that seemingly “comfirmed” the claims made in the longer articles. 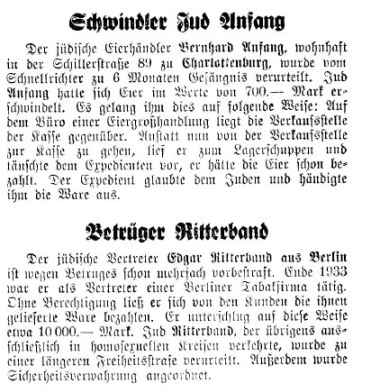 First you read about Jews that was claimed to have committed fraud, thus being criminal, then you read articles about how Jewish culture and holy books (The Talmud) allegedly encouraged Jews to kill, lie and steal from non Jews. The text below is about the claim that Jews were allowed to kill nonjews (The same is said about Muslims today. It is claimed that Muslims are free to rape, and kill “kuffar”, i.e. non Muslims.)

The Jews were even using the blood of children in their food, The Nazis claimed. The ultimate “evidence” of Jewish aggressivity and criminality: human sacrifice. 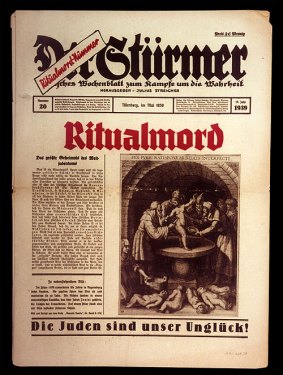 The Nazi book “the Jew as a Criminal” is translated and can be read online.

“The frequent criminality of the Jew is as well known a fact as its peculiar inclination and aptitude for fraud, dirty enterprises, cheating in gambling, usury, sexual offenses of all kinds, pickpocketing, high treason, etc. These things shall find their confirmation here.  Beyond this, however, evidence is introduced that the role of Jewry incriminality does not limit itself to a more or less large participation, but rather is much more significant. In actually, the final threads of the criminal world come together in the hand of the Jew. The Jew is not only beneficiary of crime, he is also the leader and wire-puller of the criminal Underworld…”

The method of the book was simple: statistics. It was claimed that Jews were over-represented in criminal statistics.

That was not true as actual statistics from the 30s reveal. Jews were under-represented in criminal statistics. But that is not the main point. Even if there had been an over-representation if would still have been wring to blame all Jews and Jewishness becaise of that.

“The Jew is sexually undisciplined and uses every opportunity to satisfy his sexual greed.”

Well, about the same as they say about Muslims today, right?!

Antisemitism is still a very big problem and the lie that Jews are criminals is still very widespread. But today the Muslims are blamed too, with the same racist logic the Nazis used against the Jews 80 to 90 years ago.