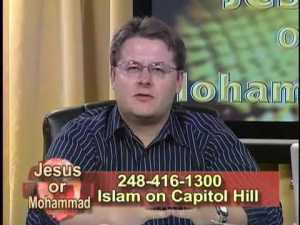 David Wood is a Christian apologist who attempts to save Muslim souls through his organization Acts 17 Apologetics and www.answeringmuslims.com. In the past Wood and his entourage, including Nabeel Qureshi, have targeted the Dearborn Arab Festival in Michigan for proselytism.

At the 2009 Arab Festival, David Wood made a controversial, and some claim one sided video that received over a million hits on YouTube which showed them getting kicked out of the festival. They claim that they were just engaged in free speech, whereas security at the festival stated that they were insulting and harassing festival goers.

Other Evangelical Christians criticized Wood and his group as being agitators,

“The Rev. Haytham Abi Haydar, a Christian evangelical convert from Islam with Arabic Alliance Church in Dearborn, said that a Christian group called Acts 17 Apologetics caused the problems at this year’s Arab festival.

They put cameras in their faces and were very antagonistic,” Abi Haydar said of the group that produced the controversial video that has drawn almost 1.4 million views on YouTube.

Just recently at the 2010 Dearborn Arab Festival, David Wood, Nabeel Qureshi and two others were arrested for disorderly conduct. Obviously intending to make a scene in an attempt at more YouTube success by portraying themselves as being persecuted.

Now David Wood, whose “love of  Muslims” seems to be akin to Pamela Geller’s (who he links to favorably a number of times) is joining arms with the anti-Muslim hate group SIOA in opposing the mosque and cultural center that is to be built a few blocks away from Ground Zero.

In the following video, filled with disinformation, falsehood and inaccuracies he expounds his reasons as to why he is against the mosque, and why he sees Muslims as a lurking evil attempting to take over the West. We expose it all in this series.

Of Mosques and Men

10 years later, two groups of Muslims, the Cordoba Initiative and the American Society for Muslim Advancement are planning to build a Massive 13 story mosque right here behind me.

Right off the bat we see the disinformation at work, this isn’t a “13 story mosque,” (why would Muslims need 13 stories to pray in the middle of Manhattan?). The fact is this is a cultural center, that along side a space for a mosque will contain a theater, swimming pool, restaurant and other facilities with the expressed goals of promoting tolerance and mutual co-operation between people of different and varying backgrounds.

“Understandably, many people here in the West are concerned…”

WTF? Many people in the “West” are concerned? I highly doubt the masses of people in Europe or Canada really care about this particular Islamophobia-driven agitation, unless the “many people” he is referring to is the small hate group SIOE (Stop the Islamization of Europe and parent organization of SIOA) whose main campaigns revolve around opposing mosques and other anti-Muslim initiatives.

While I was in College my best friend was a Muslim named Nabeel Qureshi. Nabeel showed me some photographs shortly after the September 11th attacks, and I found them quite surprising. Muslims were passing these photographs around and Nabeel thought they were absolutely hilarious. The first photograph was a picture of George W. Bush as a Muslim, and I have to admit that was actually pretty funny, 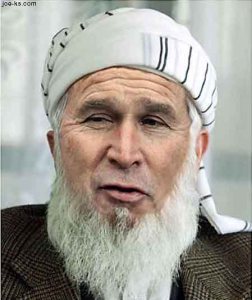 The second photograph wasn’t so funny, it was a photo shopped picture of the Statue of Liberty covered in a full veil. 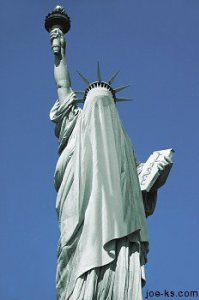 Now, this one bothered me a little bit. The Statue of Liberty, the symbol of freedom and justice, covered by a full veil, a symbol of oppression and Shariah Law, now these two pictures actually worked their way around the internet and lots of people are familiar with them.

The third picture, is the one that disturbed me however, it was a photo shopped picture of New York City covered in mosques and minarets, in the bottom corner it said New York City 2006. 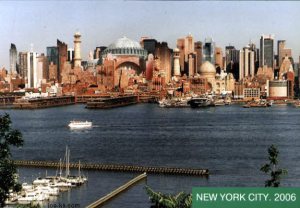 The idea was that the terrorist attacks had cleared the ground for the construction of new mosques.

David Wood makes some audacious claims that we are supposed to take as veritable truth upon his word. First, that the photographs he saw originated with Muslims. Second, that Muslims at his College were passing them around, (ostensibly in “celebration of 9/11”). Third, that a burka is a symbol of Shariah Law, and fourth, that the third picture was meant to convey the “idea that the terrorist attacks had cleared the ground for the construction of mosques.”

The truth is that all three of the photographs originate from a comedy website called “www.joe-ks.com,” (a fact conveniently hidden by David Wood in the video) which claims to be the “largest source of internet humor.” The site is definitely not Muslim or terrorist sympathetic, essentially it is a website that has jokes about everything, and a lot of the jokes lampoon terrorists and extremists, and some of them even lampoon whole countries such as Afghanistan, Saudi Arabia, etc.

For example one of their posts is titled Afghan Humour:

Q: What do Kabul and Hiroshima have in common? A: Nothing,…. yet.

Q: What is the Taliban’s national bird? A: Duck

Q: How is Bin Laden like Fred Flintstone? A: Both may look out their windows and see Rubble.

Q: Why does the Afghanistan Navy have glass bottom boats? A: So they can see their Air Force.

Q: What do Osama Bin Laden and General Custer have in common? A: They both want to know where those Tomahawks are coming from.

Q: Why aren’t there any Wal-Marts in Afghanistan? A. Because there’s a Target on every corner.

David Wood must have seen the original post on Joe-KS which would put the pictures above into their proper context instead of the deceptive context that he has created. The pictures weren’t created or disseminated by Muslims after 9/11 as a means of celebrating or “dealing with the tragedy through humor”, in fact the post that first contained the pictures was lampooning terrorists. The post published in October 2001 was titled, If the Taliban wins the War #1, #2, #3.

David Wood makes a claim that Muslims were passing these pictures around when the truth is they were created by and disseminated by non-Muslims who were making fun of terrorists and extremists. He doesn’t provide any evidence of Muslims passing these pictures out, instead we are supposed to take him at his word.

In reality it is a clever ploy that omits the fact that not only were Muslims also victims of 9/11 but all major American Muslim organizations condemned the attack in the strongest possible terms. However, he wants to caste Muslims in a dehumanized image: ‘they are not part of our suffering, in fact they are mocking our suffering and enjoy and support 9/11.’

His disingenuous claim that the third picture is meant by Muslims to convey the idea “that the terrorist attacks had cleared the ground for the construction of mosques” is a cynical attempt to link the humor piece deriding the Taliban to the current construction of the Cordoba Cultural Center.

He attempts to instill in the minds of his watchers the idea that this was the plan all along. In doing so he asserts the interesting, if off the wall conspiracy theory that Osama Bin Laden was somehow in cahoots with the founder of the Cordoba Initiative Imam Feisal Abdul Rauf, (a Sufi Imam who has condemned Bin Laden and supported the War in Afghanistan).

You see, the plan all along to subvert and take over the West was that Bin Laden’s goons would fly planes into the Twin Towers, then ten years later Imam Abdul Rauf, (who has never spoken to or met Bin Laden) would telepathically (through secret Muslim Taqqiyah radar) communicate with Bin Laden to receive orders to stealthily build a gigantic 13 story Mosque a few blocks away from Ground Zero!