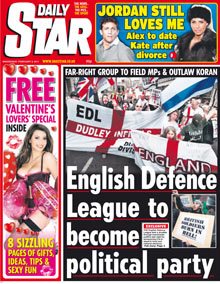 This is pretty bad even for a tabloid.

The Daily Star has been accused of printing fictional stories by a disgruntled reporter who has resigned over its “hatemongering” anti-Muslim propaganda.

In a resignation letter, Richard Peppiatt said he was leaving after the Star gave sympathetic coverage to the far-right English Defence League last month.

Peppiatt admits producing a number of fictional stories about celebrities during his two years at the tabloid, a practice he implies was sanctioned by his seniors.

The reporter, who was once made to dress up in a burqa, now accuses the paper of inciting racial tensions and Islamaphobia. “You may have heard the phrase ‘the flap of a butterfly’s wings in Brazil sets off a tornado in Texas’,” Peppiatt wrote to the proprietor, Richard Desmond, in a letter seen by the Guardian.

Desmond’s media empire has included pornographic magazines and adult TV channels as well as Express newspapers, Channel 5 and celebrity magazines. Desmond has said he was not consulted before the decision to publish the front-page story and editorial about the EDL.

Peppiatt tells him in his letter: “The weight of your ownership rests heavy on the shoulders of everyone, from the editor to the bloke who empties the bins.”

Peppiatt, who handed in his resignation this week, said the “incendiary” suggestion the EDL was planning to field election candidates was known to be an exaggeration. “But further up the newsprint chain it appears a story, too good to allow the mere spectre of reality to restrain, was spotted,” he wrote.

The EDL story is one of a number of prominent articles published by the Star that Peppiatt claims were made up, including some of his own. The reporter was recently involved in stories claiming Rochdale council had spent taxypayers’ money on “Muslim-only squat-hole loos”. In fact, the toilets were neither paid for by the local authority or “Muslim-only”.

“I was tasked with writing a gloating follow-up declaring our post-modern victory in ‘blocking’ the non-existent Islamic cisterns of evil,” Peppiatt wrote. The Press Complaints Commission later ruled the story was inaccurate and misleading.

The reporter also quotes Kelly Brook, who recently complained about the number of fabricated stories she reads about herself on the internet. She said: “There was a story that I’d seen a hypnotherapist to help me cut down on the time I take to get ready to go out. Where do they [journalists] get it from?”

Peppiatt wrote: “Maybe I should answer that one. I made it up. Not that it was my choice: I was told to.” He said he had “plucked” the story about Brook’s experimentation with hypnotherapy from his imagination, adding: “Not that it was all bad. I pocketed a £150 bonus.”

In a list of “my other earth-shattering exclusives” for the Star, Peppiatt recalls producing articles about Michael Jackson, the pop star Robbie Williams and Katie Price which he said had no factual basis.

He also admits making up a story suggesting that Matt Lucas was on suicide watch following the death of the comedian’s former civil partner. Lucas won substantial damages in court. Peppiatt criticises the Star’s editorial judgment in his letter, accusing it of hypocrisy, and “arranging the day’s news based on the size of the subjects’ breasts”.

He adds: “On the awe-inspiring day millions took to the streets of Egypt to demand freedom, your paper splashed on: JORDAN … THE MOVIE. A snub to history? Certainly,” he writes. “An affront to Journalism? Most definitely.”

As a young reporter desperate to make his name in Fleet Street, Peppiatt concedes he took to his commissions “with gusto”, but now questions the ethics of what he was required to do, suggesting he was at times promoting an anti-Muslim agenda.

“On order I dressed up as John Lennon, a vampire, a Mexican, Noel Gallagher, St George (twice), Santa Claus, Aleksandr the Meerkat, the Stig, a transvestite, Alex Reid. When I was ordered to wear a burqa in public for the day, I asked: ‘Just a head scarf or full veil?’ Even after being ambushed by anti-terror cops when panicked Londoners reported ‘a bloke pretending to be a Muslim woman’, I didn’t complain.

“Mercifully, I’d discovered some backbone by the time I was told to find some burqa-clad shoppers (spot the trend?) to pose with for a picture [with me] dressed in just a pair of skin-tight M&S underpants.”

Peppiatt’s letter concludes by criticising Desmond for not providing greater resources. “When you assign budgets thinner than your employee-issue loo roll there’s little option but for Daily Star editors to build a newspaper from cut-and-paste jobs off the Daily Mail website, all tied together with gormless press releases.

“But when that cheap-and-cheerful journalism gives the oxygen of publicity to corrosive groups like the EDL … it’s time to lay down my pen.”

The Daily Star rejected Peppiatt’s claims, implying he may hold a grudge against his employer after being “passed over” for several staff positions. It said: “Regarding the paper’s coverage of Islam, he never voiced any disquiet over the tone. For the record, the Daily Star editorial policy does not hold any negativity towards Islam and the paper has never, and does not endorse, the EDL.”[Peppiatt] refers to a Kelly Brook story – in fact he approached and offered the newspaper that story, vouched for its accuracy, and then asked for and received an extra freelance fee for doing so,” the statement said.

The Star also claimed that Peppiatt had been warned by senior reporters after suggesting he would make up quotes.