By Garibaldi on December 26, 2011 in Loon Rabbis, Loon Violence 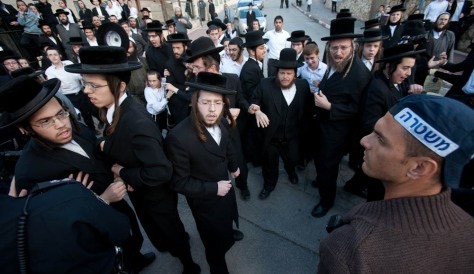 A police officer was wounded as clashes erupted between ultra-Orthodox Jews and Israel police on Monday in two separate neighborhoods in Beit Shemesh. Two residents were also arrested in the clashes.

Approximately 300 ultra-Orthodox Jews began chasing police officers, hurled rocks at them, and burned trashcans after police were called to remove a sign on a main street that orders the separation of men and women in the neighborhood. The sign has been removed and re-instated several times over the past two days.

Confrontations also occurred in another of the city’s neighborhood after a Channel 10 news crew attempted to film a news piece in the neighborhood. The crew was surrounded by ultra-Orthodox residents who began harassing the crew, who immediately called for police reinforcement.

Officers arrived on the scene, and clashed with residents who laid on the ground in order to protect those which the police sought to apprehend for questioning.

On Sunday, a Channel 2 news team was attacked and beaten by 200 ultra-Orthodox men at the same location on the street where the sign that was removed had been hanging.

After the assault on the Channel 2 news team earlier Sunday, one resident living nearby said that the sign in question has existed for six years already. He added that it does not order women not pass in the street, but to abstain from gathering on the sidewalk.