In May of 2010, Douglas Story‘s vehicle was photographed containing anti-Islam slogans and neo-Nazi symbols: 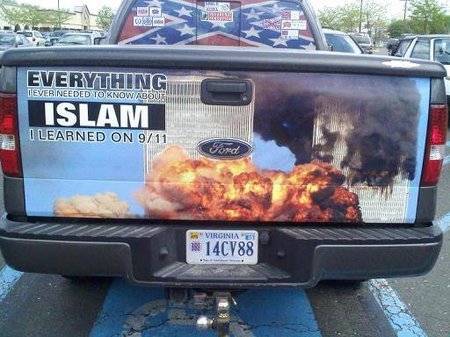 Is this the back of some neo-nazi’s truck, or the cover of Robert Spencer’s next book?

CAIR filed a complaint with the Virginia Department of Transportation about the “license plate of Douglas Story” claiming that the numbers “14” and “88” were symbolic neo-Nazi code.

As Loonwatch contributor Rousseau reported at the time,

CAIR picked up on this loony truck driver’s mural and then apparently noticed his license plate number, which read “14CV88.” Ibrahim Hooper, communications director of CAIR, argued that this number was code for neo-Nazi white supremacist ideas; Hooper explained: “…Among neo-Nazis, 88 refers to ‘Heil Hitler,’ because H is the eighth letter of the alphabet. White supremacists sometimes use the number 14 as shorthand for the 14-word motto, ‘We must secure the existence of our people and a future for white children.’”

Story denied being a neo-Nazi, saying instead that the numbers on his license plate referred to his favorite NASCAR racers. This turned out to be a lie…more anti-Muslim so-called taqiyyah if you will.

CAIR was correct that Story was a White Supremacist. The Washington Post’s Brigid Schulte reported just a couple of days later that Douglas Story’s Facebook page was replete with white supremacist associations:

Arguing that his license plate was purely about NASCAR and had nothing to do with race, Story told me that he had a Jewish sister-in-law and had attended his niece’s bat mitzvah. He denied being anti-Semitic.

Note to self: In these days of social media, Twitter and personal oversharing on the web, always check Facebook…

When I called Story to ask about the Facebook page, he continued to maintain that his license plate message had nothing to with racism. He stuck by his NASCAR story. “Southern white men. Southern white sport. What else needs to be said?” he said.

Story acknowledged that he thinks of himself as 100 percent Aryan. “Aryan is a Sanskrit word that means noble,” he said, “no matter what spin the liberal media tries to put on it as being a racist, hate word.”

He said he is an admirer of David Duke, who, he said was “reamed by the media because of his Klan affiliations.” “I am a white nationalist,” Story said. “I am in favor of the whites having their own homeland.” When I asked him where that homeland would be, he said he didn’t know. “The Pacific Northwest maybe. Alaska. Denmark. Greenland. Iceland.”

I asked if he really thought that the Holocaust was a hoax. “I don’t know what to think,” he said.

Rather than condemn Story, Spencer offered this initial defense,

…CAIR’s whole story was false in the first place: the driver in question, Douglas Story, is not a neo-Nazi at all, but a racing fan. The alleged code numbers for neo-Nazi slogans were actually favorite race car drivers’ numbers.

Will Honest Ibe Hooper apologize to Douglas Story? Come on, Ibe! It would be the decent thing to do!

Spencer also argued the entire episode was a ploy by CAIR to link “anti-jihadists” like Spencer to neo-Nazi white supremacists,

The implication of the story, of course, was that anti-jihadists are neo-Nazis — which, despite the febrile fantasies of libelblogger Charles Johnson and his cohort, CAIR’s amiable stomach-stapled beekeeper Honest Ibe Hooper, flies in the face of the facts…

Spencer never apologized for being so horribly wrong about his “anti-Jihadist” buddy being a White Supremacist. Instead he posted a one sentence update saying, “The Washington Post has uncovered evidence that Douglas Story is indeed a white supremacist racist. In that case, he deserves whatever he gets from the DMV.”

In a new twist to this story, yesterday, Douglas Story was arrested by the FBI’s Joint Terrorism Task Force “after allegedly receiving a fully automatic AK-47 from an undercover agent.”

A Manassas man accused of being a white supremacist was arrested Wednesday by members of the FBI’s Joint Terrorism Task Force after allegedly receiving a fully automatic AK-47 from an undercover agent.

Court records show Douglas Howard Story, 48, of the Manassas area, allegedly provided a semi-automatic AK-47, along with $120, to an undercover law enforcement agent with the intent that it be modified to become fully automatic. He then allegedly received the modified weapon from an undercover agent and was subsequently arrested, according to the U.S. Department of Justice.

U.S. Attorney for the Eastern District of Virginia Neil H. MacBride and FBI  Assistant Director for the Washington Field Office announced Story’s arrest Wednesday.  He has been charged with a violation of the National Firearms Act – a charge that carries a maximum penalty of 10 years in prison.

I’m not a fan of the FBI’s Joint Terrorism Task Force, as they have been deeply involved in abusing constitutional rights, through profiling, secret surveillance and entrapment activities. Story’s arrest however does, once again, bring to surface the fact that the so-called “anti-Jihad/counter-jihad” movement is filled with neo-Nazis, fascists, and racists of one stripe or another.

Robert Spencer will you finally apologize for defending a neo-Nazi “White Supremacist” even after the above image of his car, replete with neo-Nazi symbolism, the Confederate flag, and anti-Islam propaganda were evident? Do you, Spencer, agree with the neo-Nazi Story that “all we need to know about Islam we learned on 9/11?”

Something tells me Spencer’s apologies and answer will not be forthcoming.