By Emperor on October 16, 2012 in Feature, Loon Blogs, Loon Politics

It’s going to be Islamophobia on crack if Mitt Romney wins (thanks for all who sent in tips): 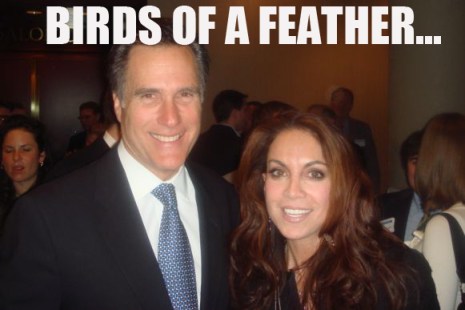 Pamela Geller, for all those who’ve forgotten is the looniest blogger ever. Everything out of her mouth competes with everything she has said in the past to be more over-the-top, racist, hateful, and Islamophobic.

Just take look at a sampling of her positions over the past three years:

Pamela Geller calls for the destruction of the Golden Dome;  Obama is a Mooslim, Jihadist, Pimp, anti-Semite who is aiding the Iranian Nuclear program;  Sharia Coke is taking over the world, it is defamation of Judaism and Christianity for Islam to include Moses and Jesus as Prophets of Islam;  Pamela Geller is a Holocaust Revisionist who claims that Hitler and the Nazis adopted Jihad;  Not only is Obama a secret Muslim, but according to Pamela Geller,  “Obama is bringing his jihad to Illinois…Obama’s treachery is breathtaking“;  Pamela Geller calls for the nuking of Mecca, Medina, and Tehran;  Pamela Geller promotes a genocidal video, Pamela Geller shows sympathy towards white supremacist;  Screenshot of Pamela Geller’s post on June 25th wherein she posted a video claiming that Muslims engage in bestiality;  Pamela Geller left speechless when called out for drawing a picture of the Prophet Muhammad with a pig’s face.

More serious than Geller posing in a pic with Mitt Romney is the insidious nature of Romney’s ties with the Islamophobia movement. Romney’s senior foreign policy adviser is none other than former Bush era UN Ambassador John Bolton.

One can only hope that in tonight’s debate the moderator questions Romney about his ties to radicals and inclusion of Islamophobes like John bolton on his staff. Gus from Little Green Footballs has compiled an incisive compilation of the ties between Bolton and Geller.: 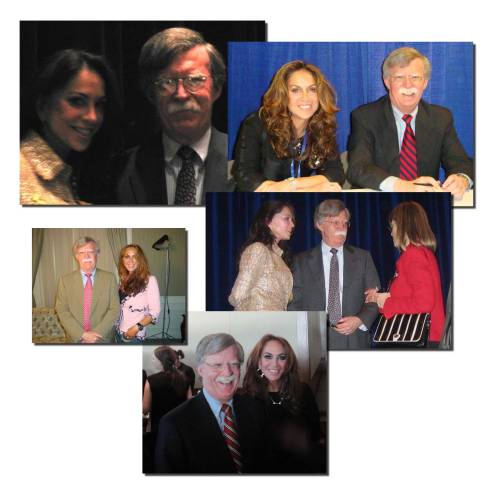 John Robert Bolton (born November 20, 1948) is an American lawyer and diplomat who has served in several Republican administrations. Appointed on a recess appointment, he served as the U.S. ambassador to the United Nations from August 2005 until December 2006. He resigned in December 2006, when the recess appointment would have otherwise ended, because he was unlikely to win senate confirmation. 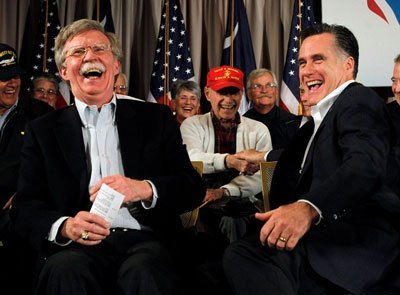 Bolton is currently a senior fellow at the American Enterprise Institute (AEI), frequent op-ed contributor to the Wall Street Journal and the National Review, Fox News Channel commentator, foreign policy adviser to 2012 presidential candidate Mitt Romney, and of counsel to the law firm Kirkland & Ellis, in their Washington D.C. office…

The reader should be reminded of the connection between Anders Breivik and Pamela Geller. There is also a connection between Anders Brevik and Robert Spencer.Tommy Robinson’s hooliganism and right-wing extremism is notorious and too extensive to cover here. You can however find many articles covering his organization, the English Defence League, which has been covered extensively at LGF including his connection to Pamela Geller and Robert Spencer.

There is no vast conspiracy at play here. However, it should be disturbing enough that the senior foreign policy adviser to Mitt Romney, John Bolton, has the ear of anti-Islam extremist, Pamela Geller. Her connection with the EDL makes this plainly obvious. This my friends is the post-modern conservative movement, where we find odious characters in the Republican big tent whose lives are intertwined; in this case from Mitt Romney to Pamela Geller; Tommy Robinson (EDL), Robert Spencer and Pamela Geller; and most importantly, the close relationship of John Bolton and Pamela Geller.

Update I: Michael Elwood reminds us that another Islamophobe, Walid Phares is also a part of the Romney’s inner circle,