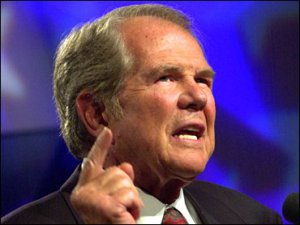 Controversial conservative Christian Pat Robertson doubled down Tuesday on claims that Islam is not a religion.

According to Right Wing Watch, Robertson, an elder statesman of the evangelical movement, made the inflammatory claim during an episode of his TV program, “The 700 Club.”

“Every time you look up — these are angry people, it’s almost like it’s demonic that is driving them to kill and to maim and to destroy and to blow themselves up,” Robertson said of Islam. “It’s a religion of chaos.”

He went on to say, “I hardly think to call it a religion, it’s more of — well, it’s an economic and political system with a religious veneer.”