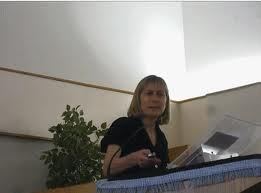 Is it a coincidence that Rossman-Benjamin gave her speech smearing student activists as being “anti-Semites with ties to terrorists” at Ahavath Torah Congregation, a synagogue led by the Islamophobic Rabbi Jonathan Hausman? The same synagogue has given a platform to the wild eyed bigot Pamela Geller, the anti-Muslim neo-Fascist Dutch politician Geert Wilders, as well as Wafa Sultan, who has called for “nuking and crushing” Muslims.

Student activists in California have exposed inflammatory remarks made by a university lecturer who is the head of an Israel lobby group that tries to pressure college administrations and state officials into investigating what the lecturer calls anti-Semitism. Activists have started a petition calling on the University of California President to condemn the statements made last year by Tammi Rossman-Benjamin, a Hebrew lecturer at the University of California, Santa Cruz (UCSC). The remarks were only recently publicized after students discovered them through a YouTube video of Rossman-Benjamin’s remarks.

Last June, Rossman-Benjamin gave a presentation on what she calls “campus anti-Semitism” at the Ahavath Torah Congregation in Stoughton, Massachusetts. She unleashed vitriolic comments smearing student activists who work for Palestinian rights as anti-Semites with ties to terrorist organizations, though she did not back up her statements with evidence. Rossman-Benjamin is the head of the AMCHA Initiative, a Zionist pressure group that targets professors and student groups for alleged anti-Semitism, though the actions AMCHA goes after are activism for Palestinian rights.

“They are generally motivated by very strong religious and political conditions–they have a fire in their belly. They come to the university, many of them are foreign students, who come from cultures and countries where anti-Semitism is how they think about the world,” said Rossman-Benjamin, referring to students involved with the Muslim Students Association and Students for Justice in Palestine. “These student groups often have strong ties to international campaigns to demonize and delegitimize Israel as well as to organizations like the Muslim Brotherhood…[They] have ties to terrorist organizations.” Later in her speech, Rossman-Benjamin also claims to have met with state legislators in California.

In response to Rossman-Benjamin’s remarks, activists from UCSC Committee for Justice in Palestine have started a petition that has so far garnered over 850 signatures. They are calling on the University of California President to “take a clear stand against hate speech directed at marginalized communities, and distance itself from extremists like Tammi Benjamin and the Amcha Initiative that work to smear and silence student human rights campaigners.”

So far, the University of California President’s Office has stayed silent. In an e-mail response to an inquiry from Mondoweiss, Shelly Meron, a media specialist with the president’s office, wrote: “We have no comment on this.”

Rossman-Benjamin did not return an e-mail and a phone message for comment on this story by the time of publication.

The petition from the UCSC Committee for Justice in Palestine also states that Rossman-Benjamin’s remarks “reflect the worst stereotypes and slurs leveled at Arab and Muslim communities in the post-9/11 era. They have absolutely no place in a university environment and it is completely unacceptable for a University of California lecturer to be making them, especially about students.”

Multiple students have also filed formal complaints with the University of Santa Cruz’s Hate/Bias Response Team. A school official told one student activist who preferred to go unnamed that they will look into the complaint and may investigate it and refer it to higher offices and take corrective action if appropriate.

Rachel Roberts, civil rights coordinator for the Council on American Islamic Relations in San Francisco, condemned the statements from the Hebrew lecturer in an interview.

“Her comments are an example of the ways in which Muslim students and Arab students and students organizing for Palestine are disparaged in a way that’s completely unfair to them. I personally don’t see how any reasonable individual could possibly believe that our students have ties to terrorist organizations overseas,” she said. “It’s ridiculous, it’s an attempt to sow fear.” Roberts’ organization has been working in coalition with other social justice groups to fight back against smears from legislators and others in California that conflate solidarity with Palestinians with anti-Semitism.

Other people who signed the petition, including alumni and former professors from the UC system, have echoed the student activists’ condemnation of Rossman-Benjamin. “I have experienced firsthand the intimidation tactics and attempts to silence dissent on Israel on the UCSC campus,” wrote Lisa Nessan, who described herself as a “Jewish UCSC alumna (’00) and a former Santa Cruz Hillel Foundation employee.”

Nessan went on to write that “Tammi Benjamin’s racist and islamophobic remarks are the antithesis of the type of tolerance and diversity that is expected on a University of California campus.” Robert Weil, who described himself as a “retired Visiting Assistant Professor, Lecturer and Union Organizer on the UC Santa Cruz campus,” wrote that he “can attest directly to the chilling effect that Tammi Rossman-Benjamin has had on those of us who hold critical views of Israeli policies and who support the struggle of the Palestinian people. She is a disgrace and a threat to the spirit of free academic debate and the right of all citizens–on and off campus–to express their ideas without intimidation.”

The activists’ petition–and the video that sparked it–shines a light on the tactics of Rossman-Benjamin. Through her organization, the AMCHA Initative, Rossman-Benjamin has targeted professors who show solidarity with Palestinians and who support the boycott, divestment and sanctions (BDS) call. Her modus operandi is to conflate support for Palestinian human rights and strong criticism of Israel with anti-Semitism.

As Mondoweiss has reported, Rossman-Benjamin was behind a 2011 federal complaint against the University of California at Santa Cruz. The complaint charged that the university ignored concerns that a hostile environment for Jewish students was being created on campus due to criticism of Israel. The U.S. Department of Education took up the Title VI complaint, and continues to investigate, according to the student activists’ petition. Rossman-Benjamin also unsuccessfully tried to get the California State University system to distance itself from a tour on campuses that featured Israeli professor Ilan Pappe. Her attempts to get state officials to investigate a professor who supports the BDS call also failed.

Still, activists say the remarks from a lecturer employed by the University of California is a glaring example of a hostile climate on campus when it comes to organizing for Palestinian rights. Last year, the California state legislature passed a bill that conflated activism and the BDS movement with anti-Semitism and also claimed that student activists had ties to terrorist organizations–similar rhetoric to what Rossman-Benjamin used at her Massachusetts appearance. That state legislation also applauded the release of a “campus climate” report on Jewish students in California that has been criticized for suggesting things that would impose restrictions on Palestine solidarity activism.