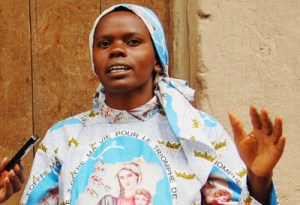 There are issues of state interference in this Catholic sect’s activities but the resort to violence by sect members is pretty appalling.

What if they were Muslim? Just imagine how such an incident would be reported. (h/t: Sir David)

The violence broke out after police tried to block followers of 30-year-old Zebiya Ngendakumana from praying in Kayanza region, the official added.

Ms Ngendakumana says she sees visions of the Virgin Mary on the 12th day of each month.

The authorities are worried her sect could threaten public order.

The sect, formed more than a year ago, has developed a following across the country and in neighbouring Democratic Republic of Congo.

Kayanza Governor Athanase Mbonabuca said hundreds of sect members, some “armed with clubs and stones”, resisted police attempts to prevent them from meeting on a hilltop on Tuesday, the day Zebiya Ngendakumana said she would see her visions, AFP news agency reports.

“There were violent clashes. At least six people are dead and 35 wounded,” he is quoted as saying.

All the dead are believed to be followers of Ms Ngendakumana, with four policemen seriously wounded, AFP reports.

The sect has had a tense relationship with Burundi’s government since its formation, says Florentine Kwizera of the BBC’s Great Lakes Service.

Last year, police destroyed a sanctuary of the sect in Kayanza – its stronghold – and its followers retaliated by breaking up a Sunday service at a local Catholic church, she says.

Most Burundians are Catholic and the official church has distanced itself from the sect.

The sect has also urged its followers to boycott the government’s community service programme.

It is not clear why it is opposed to the programme, which sees residents of towns and cities engage in activities such as cleaning streets and refurbishing schools every Saturday.

Burundi, Catholicism, Kayanza, Religious Violence, What if they were Muslim, Zebiya Ngendakuman