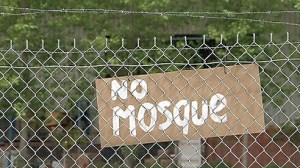 A happy end to an anti-Mosque campaign in Doveton’s industrial area.

Melbourne mosque get go ahead from local council

Supporters of a mosque in Doveton’s industrial area have urged anti-Islamic cleric Pastor Danny Nalliah and his followers in the Catch the Fire Ministries to learn to live with it.

Outside Casey Council chambers on Tuesday night, supporters were quietly jubilant after Casey councillors ticked off the mosque in accordance with a recommendation from their planners. But Mr Nalliah, who has led the campaign against the mosque, described the decision as “a sad day for Australia” and said his group would appeal to the Supreme or Victorian Court to overturn it.

A spokeswoman for the applicants, Sherene Hassan, urged Mr Nalliah and his followers to follow Jesus’ precept and “love thy neighbour”. “That’s what we plan to do,” she said. “But we haven’t felt much love from this group.” The mosque is being built next to Catch the Fire’s new headquarters and church, and Ms Hassan said they would welcome visitors from the neighbouring church.

Mr Nalliah was in the public gallery, along with about 60 supporters, who were watched closely by four police and four security officers. The atmosphere was tense but there was not the disruption from the gallery of a previous meeting.

Councillors voted nine to one to approve the mosque despite 33 objections and 14 petitions containing more than 2000 signatures opposing it. They accepted the recommendations of the planning department, whose report stated that “fears of the unknown” were not valid grounds for rejecting the mosque.

Objectors cited traffic concerns, lack of public transport, loss of amenity for neighbours, the height of the mosque, noise concerns and concerns that Islam “teaches hate”.

In their report, the planners cited an earlier ruling by the Victorian Civil and Administrative Tribunal in relation to a Romanian Orthodox Church in Narre Warren North which made it clear “fears of the unknown” were not appropriate grounds for refusing a permit. “It follows that religious or cultural differences (or fears) are not within the realm of the planning scheme assessment.”

They stated the application was consistent with state and local planning policies and there were two approved places of worship near the proposed site, 27-31 Green Street, including the new headquarters of Catch the Fire Ministries next door.

The sole councillor to oppose the mosque, Rosalie Crestani, asked repeated questions of the planning department but did not raise the anti-Islamic objections she had raised in previous meetings.