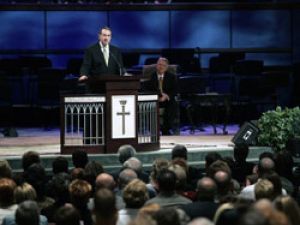 Mike Huckabee, former Arkansas GOP governor-turned-Fox News host and radio personality, tore into Islam earlier this week, using a recent terror threat that put United States embassies on high alert to suggest that the Muslims were “uncorked animals,” encouraged to be violent by the religion itself.

Speaking on his radio program on Monday, Huckabee prefaced his remarks by saying that he understood it was “politically incorrect” to “say anything unkind about Islam.” He then went on to suggest that Islamic teachings were to blame for recent unrest during the holy month of Ramadan.

“Can someone explain to me why it is that we tiptoe around a religion that promotes the most murderous mayhem on the planet in their so-called ‘holiest days,’” Huckabee said. “You know, if you’ve kept up with the Middle East, you know that the most likely time to have an uprising of rock throwing and rioting comes on the day of prayer on Friday. So the Muslims will go to the mosque, and they will have their day of prayer, and they come out of there like uncorked animals — throwing rocks and burning cars.”

(Click over to Daily Caller, which first caught the comments, for video of Huckabee’s remarks.)

Huckabee, a former Baptist minister, then attempted to clarify that his previous comments were somehow not an attempt to paint a religion of around 1.6 billion followers with a broad brush.

“You know, I’m just pointing out that for all of the demands that we’re supposed to be so very polite, and I’m not saying all Muslims are radical and I am not saying that all Muslims are violent. I’m not,” he continued. “But we as a government recognize that the most likely times for them to erupt in some type of terrorist activity, violent storming of an embassy, is on their holy days.”

Huckabee went on to say that Christians were different than Muslims because their behavior after Christmas or Easter church service was more likely to consist of eating themselves into a coma than violence.

“That’s just not what we do. It never occurs to us that on the days in which we are supposed to be humbled by the presence of God that somehow we would rise up and kill innocent people including children,” he said. “It just doesn’t seem to fit. And I know I’m likely to just get hammered for what I’ve just said. So be it. I bring it up because it just doesn’t make sense to me.”

As ThinkProgress notes, there is some accuracy to Huckabee’s observation about the timing of destructive demonstrations, though his suggestion that the scheduling of the displays is connected directly to Islamic teachings shows a lack of understanding of the political significance associated with the day of prayer.

CNN reported in 2011, during the heat of unrest throughout the Middle East, that there are numerous factors that have made Friday the most popular day for protests, including the fact that most of the Muslim world gets the day off and frequently congregates in large communal areas to observe the day of prayer.

Qasim Rashid, national spokesperson for the Ahmadiyya Muslim Community USA, pushed back against Huckabee’s claims in a column for the Daily Caller, accusing him of exhibiting beliefs about “the other” that are “dangerously similar” to the Taliban and al Qaeda. He went on to argue that Huckabee has no Qur’anic verse or hadith to support his claims, and that he is putting forth a clear double standard in suggesting that violence in Muslim nations is caused by Islam itself:

That nation is the United States, which is majority Christian, Rashid noted, arguing that under Huckabee’s reasoning, he should blame Christianity for those statistics. Rashid also pointed to a recent study showing Christmas to be the deadliest day of the year. Rashid wasn’t arguing that Christian teachings are to blame for any of these statistics, however, he was simply urging people not to learn about Islam from Huckabee.