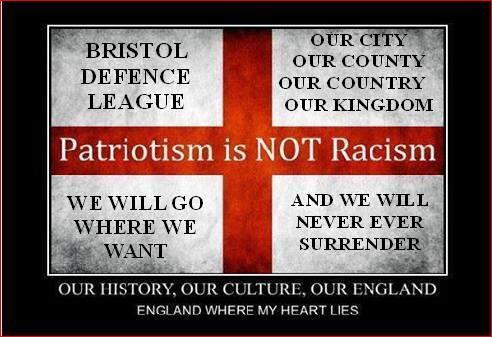 Last month the English Defence League leadership – now a committee known as the Management Group, which is composed of the regional organisers – issued what was on the face of it a stern warning to EDL members against involvement with the various far-right splinter groups that have emerged from the movement over the past few years.

Accusing these rival groupuscules (quite accurately) of being “openly White Pride and racist”, the Management Group emphasised (albeit not very coherently) that “we will not stand with groups that do discriminate and are racist such as the Britain First/SEA/NWI/NEI/EVF/BNP/NF/C18 & White Pride or such like minded openly discriminating against any creed, race, colour other than white”.

EDL members were told: “If you wish to have unity with these groups then you have the option to leave the EDL as a supporter and join one or all of these groups. The splinter groups have minimal numbers and need unity with the EDL to make their numbers up not the other way. If you choose do so then we wish you good luck.”

However, for all their pious condemnation of racism and fascism, the Management Group was not actually proposing a general ban on EDL members participating in the protests organised by these splinter groups: “If any EDL supporter wishes to attend any of these other groups demos then all that we request is that you do not wear EDL colour’s or state you are in attendance as an EDL supporter.” In other words, the EDL leadership has no principled objection to its members’ active involvement with white supremacist, antisemitic and homophobic organisations – just as long as the EDL’s name is kept out of it.

Neverthless, as EDL News reported at the time, this provoked defections by a number of EDL divisions. One of them is in Bristol, where the leadership took badly to being given instructions by the national leadership. Leading local EDL activist Chelsea Anne White posted an indignant response to the new orders, complaining on the EDL Support Group’s Facebook page that “when i joined the EDL 3 years ago i was led to believe it was a street movement not a dictatorship”. According to White: “Good leadership dosen’t tell people what to do…..it is there to offer knowledge, assistance and support.”

Bristol EDL was originally headed by Mickey Bayliss, whose self-proclaimed opposition to racism didn’t prevent him from posting racist ‘jokes’ on Facebook. When Bayliss left to take over the organisation of Portsmouth EDL, he was replaced as leader of Bristol division by Ed Dowden, who combined that position with the post of Somerset and Avon district officer for the Mosleyite New British Union. So you can understand why Bristol division should resent being told not to openly associate with racists and fascists, given that the division has itself been led for years by proponents of racism and fascism.

As a result of Bristol’s refusal to accept the national leadership’s directive, there were for a while two Bristol EDL Facebook pages – the original one, which was in the hands of the dissidents, and a new loyalist page, English Defence League Bristol Division Official. At the weekend, however, the split was made official when the rebels took down their old Facebook page and launched a new one, in the name of the Bristol Defence League. Proudly announcing the formation of yet another far-right fragment, the BDL explains that “the true patriots of Bristol have left the ranks of the EDL behind and gathered together in the name of UNITY!”

This formal break with the EDL was evidently inspired by a far-right meeting held in Essex on 1 February, which brought together various groups and individuals who had split from the EDL, including the former Bristol division, under the umbrella of the United British Patriots. A committee was established which included representatives of the South East Alliance, March for England, the English Volunteer Force, Scottish Volunteer Force, Casuals United, East Anglian Patriots, South West Infidels, Patriots Unite and the former EDL Armed Forces Division (now renamed Armed Forces Patriots), with Mickey Bayliss (now presumably back from Portsmouth) representing the BDL.

In an ill-written mission statement, which characteristically mounts a defence of English culture while showing complete contempt for the English language, the BDL proclaims that it is “against Muslim extremists, the IRA and anyone that don’t want to live or integrate into the British way of life”. Predictably, however, it turns out that the talk of “Muslim extremists” is a just cover for inciting hatred aganst the entire Muslim community and its religious practices: “We Oppose Halal slaughter the building of Mosques and Islamic ‘Education’ centres and see them as places to spread more hatred of western values.”

Equally predictably, the BDL asserts that they are a “non racist/facist [sic] non political street movement”. Not entirely consistently, the statement goes on to declare that the BDL are “against mass immigration and believe this to be a tactic for the end game of white genocide”. So, no racism there, then.

It is easy to sneer at the small forces represented by the Bristol Defence League and its allies in United British Patriots. These are all tiny groups and even if they manage to maintain their unity, which is itself questionable, they are unlikely to succeed in mobilising significant numbers to take to the streets to protest, certainly not on the scale that the EDL did at its peak. The next “unity” demonstration is the English Volunteer Force protestoutside the Houses of Parliament on 15 March, which the BDL have been enthusiasticallypromoting, so we will see.

However, the threat posed by the Islamophobic far right doesn’t lie exclusively, or even primarily, in the holding of large-scale protests. The sort of hate crime inspired by the EDL, which has involved graffiti and arson attacks on mosques and Islamic centres, and racist abuse and physical violence against Muslims in the street, doesn’t require a large number of participants to have a serious impact. The crisis and fragmentation of the EDL is obviously welcome, but it won’t necessarily lead to a decline in such anti-Muslim activity on the ground.

In December the Bristol EDL division’s Facebook page featured calls for a proposed mosque to be firebombed, to the approval of the page’s admin, resulting in a police inquiry. Shortly afterwards, when two Bristol EDL members received prison sentences for their part in an EDL riot in Walsall, they were hailed as “patriots” by Bristol division, who told the jailed hooligans that they were “proud of you both”. Just because Bristol division have split from the EDL and adopted a new name and affiliation, that doesn’t mean there will be any change in their promotion and practice of intimidation and violence.