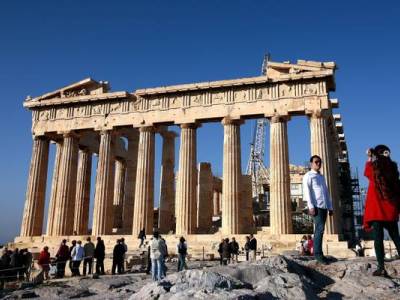 The saga of the Athens mosque, the realization of which has been delayed for years and seemed a settled issue last November, continues. Work for the construction of the Muslim temple has been blocked again, this time by political maneuvers and an appeal presented by a university teacher, two navy officials, a cultural association and the ultra-conservative bishop of the Metropolitan Seraphim of Piraeus, all of whom are against the presence of the worshipping place in the Greek capital, the only one in Europe still without a temple for its more than 200,000 residents of Muslim faith. Precisely because of the legal recourse – and the fear that a judge may rule for the complainants – the infrastructure ministry has made it known that it has not yet signed the contract to carry out the 946,000 euro project on which the tender was won five months ago by the consortium composed of four of the largest Hellenic businesses: Aktor, Terna, JP & Avax and Intrakat. The preceding four tenders for assigning construction were not successfully completed since the participating companies withdrew after threats and intimidation received from extremist right-wing groups, like the neo-Nazi Chrysi Avgì (Golden Dawn) party and residents of the Votanikos neighborhood, where the place of worship is supposed to be built, all of whom are contrary to the presence of Muslims in their zone in fear that it could become a gathering place for Islamic extremists or even a “den of terrorists”.

In the meantime, in view of the next local elections, the story of the controversial mosque has also become the subject of political fighting between various Athens mayoral candidates, further complicating the issue. The latest obstacle, if it were necessary, was raised by the Nea Dimokratia (centre-right) candidate Aris Spiliotopoulos, ex-minister of public education, who proposed holding a local referendum on the construction of the Muslim temple, even though he himself voted “yes” (together with another 197 MPs) when parliament approved the project on September 7, 2011. Yesterday morning, on screens of the private television broadcaster Skai, Spiliotopoulos reiterated his position against the construction of the mosque because it could, among other things, attract illegal immigrants “for which there is no more room in Athens”, and its presence “could cause a third world tented city on the sacred hill of the Acropolis”.He then added that the people of Athens know better than the education ministry – which is responsible for religious affairs – or the mayor where the mosque should be built, and thus it is the capital’s residents who should decide if it can exist in the city. Finally, after having reiterated that his opposition is not based on religious motives, but rather on the opportunity for choosing where to build the structure, he called once more for a referendum. Various observers have interpreted the position taken by the Nea Dimokratia candidate as a wink toward extreme right candidates. Meanwhile, for his own part, the incumbent mayor who is also running again, independent Giorgos Kaminis, emphasized the inconsistency of his adversary, and observed that the behavior of Spiliotopoulos is “contradictory” and not befitting a politician. To reduce costs to a minimum in times of serious crisis, the Greek government has decided that the mosque will not be built from scratch, but made from the renovation of a pre-existing structure. Gardens and prayer areas will be made outside the mosque, which will not have a minaret but will have the capacity to hold 350 worshippers. Four adjacent buildings will be demolished. In their place, nine new structures will be built destined for administrative offices and hygienic services.The decision to not authorize construction of a minaret did not, however, satisfy those who oppose the project, who do not want the government to spend public money for the creation of a Muslim place of prayer in a country where 96% of the population is Greek-Orthodox. In any case, given developments in the case and renewed opposition to the project, the Muslims of Athens almost certainly will still have to wait a long time before being able to pray in their mosque. (ANSAmed).