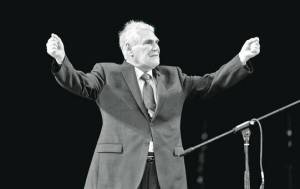 Up in arms: Pastor James McConnell has caused controversy with his anti-Islam sermon and by describing President Obama a “patchwork quilt” who doesn’t know if he’s a Christian or Muslim.

The Northern Ireland pastor at the centre of a race hate row has now hit out at US President Barack Obama.

Pastor James McConnell has labelled Mr Obama a “patchwork quilt” who doesn’t know if he’s a Christian or Muslim.

He has also claimed the PSNI would be “stupid” to make a martyr of him by putting him in jail over his controversial sermon at his Whitewell Tabernacle Church in north Belfast last weekend.

The 76-year-old preacher sparked furore with his sermon condemning Islam as “heathen and satanic” and a “doctrine spawned in hell’.

The PSNI is investigating whether he committed a hate crime in the sermon broadcast online in which said he didn’t trust Muslims.

As the row rumbles an unrepentant Pastor McConnell spoke to Sunday Life this weekend and warned of ‘God’s people’ rising up if he is jailed over his sermon.

During the interview he questioned the US President’s faith, saying: “Sure we don’t know what the President of the United States is, he’s like a patchwork quilt.

“One minute he’s a Muslim the next minute he’s Christian, I don’t think he knows what he is.”

Health Minister Edwin Poots and fellow DUP MLA Sammy Wilson have backed the veteran preacher in recent days as he faced down criticism of the language he used in his sermon.

The defiant preacher continues to reject calls for him to apologise and refuses to back down, saying: “Nobody is going to close my mouth, Islam is dangerous.”

He was dismissive of the PSNI’s ‘hate crime’ inquiry, saying: “If they want to rap my door they know where I live.

“I’ve dealt with the police all my life, they’ll not put me in jail. If the do they’ll make a martyr out of me, it would be stupid of them.

“If they did put me in jail God’s people would rise up, they’ll rise up against them.”

During his thundering sermon last Sunday, he said: “Today we see powerful evidence that more and more of Muslims are putting the Quran’s hatred of Christians and Jews alike in to practice.

“Now people say there are good Muslims in Britain, that may be so, but I don’t trust them.”

He went on to say: “Islam’s ideas about God, about humanity, about salvation are vastly different from the teaching of the holy scriptures.

“Islam is heathen, Islam is satanic, Islam is a doctrine spawned in hell.”

The east Belfast born firebrand, who has been preaching since the age of 13, emphasises that he is not saying that the Muslim people of Northern Irelandare dangerous.

Speaking to Sunday Life, Pastor McConnell said he drew the inspiration for last Sunday’s sermon from the threat he thinks Islam poses to the world.

He explained: “Millions of Muslims are taking over the world and that’s the reason why the cell groups are planted in Britain, they are planted to take over Britain.

“Eventually they will take over Northern Ireland, the Book of Ezekiel and the Book of Zechariah tells us that the Muslim countries will side with Russia and they will come against Israel.”

His huge church on the Shore Road in north Belfast has some well known former members of its congregation.

First Minister Peter Robinson and his wife Iris worshipped there and their daughter Rebekah held her first wedding at the church in 2003.

McConnell is still surprised at the reaction to his proclamations, he said one colleague phoned him to say that he has heard the pastor make worse remarks without causing a stir.

He said: “I’m absolutely taken aback by it because I was referring to the Muslim cells throughout Britain. The IRA had a lot of terrorist cells that could bomb Britain and I believe that is why the British government did a deal with the IRA and the same thing is being repeated.

“When I said that, I hadn’t even remotely in my mind any Muslim who lives in Northern Ireland.

“There were Muslims there at the service, that come to my church that heard it. They are used to me talking like this, they know my form.” He added: “I didn’t offend them because they know it’s true. I would never offend a Muslim, I wouldn’t hurt a hair on their head.”

As the row rumbles on, Pastor McConnell claims that he has not had any further complaints from the Islamic Centre in Belfast or Muslims living in Northern Ireland.

Dr Raied Al-Wazzan of the Belfast Islamic Centre said he was contacting the police and would hold Pastor McConnell ‘responsible for any racial attacks on any Muslim in Northern Ireland’.

Dr Al-Wazzan said: “This is inflammatory language and it definitely is not acceptable.”

Pastor McConnell replied: “Dr Al-Wazzan is a nice little man and all that. I don’t even know the man, never met him, but I wasn’t even referring to him.

“They took 10 minutes out of my sermon, my sermon was 35 minutes and the other 25 minutes the lovely work of Christ on Calvary and how he was a mediator for us.”

Last night a Facebook page entitled ‘Christians stand and support Pastor James-McConnell’ had over 3,500 likes. Pastor McConnell said that he would not be referring to Islam in today’s sermon.