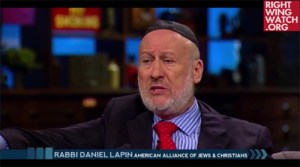 On Sunday, the Religious Right movement’s favorite rabbi, Daniel Lapin, devoted a segment of his weekly radio show to “liberalism’s love affair with Islam,” part of a running theme among right-wing activists about a purported alliance between progressives and radical Islamists. Lapin said that unlike conservatism, “liberalism is incredibly feminine” and as a result “loves [the] hard masculinity” found in Islam.

“If there is one thing that Islam has proven itself to be, certainly in recent years and even longer ago than that, it is very masculine, it is violent, it is aggressive, it is dominating and it is very firm and very confident and very sure of itself, all of these very masculine characteristics,” Lapin said.

“I believe that liberalism is drawn to it, I think liberals want to be seduced by Islam, I think liberals lay themselves down before masculine strength,” he said, continuing with the sexual analogy. “There is a reason that it is biologically impossible for a woman to rape a man, it can’t be done. And I do believe that a good deal of liberalism’s supine nature with respect to Islam, liberalism’s docility in the face of Islam, has to do with a deep desire to yield to strength.”