By Emperor on January 5, 2015 in Feature, Loon Politics, Loon Violence 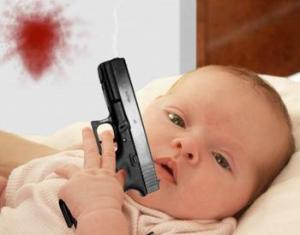 I never thought our own Elmer Fudd of the American political class, Rep. Louie Gohmert, would have something in common with those oh so wise and erudite snoots in the British Home Office! But apparently both class of politicians are freaking out, granted in a slightly different way, over — terrorist babies.

The UK’s most recent act of stupidity in regards to the Prevent program to counter terrorism is a newly proposed law, CST 2014, that would hold British educators responsible for the ideologies of their students, and yes, that includes pre-schoolers.

The suggestion, which is part of the Counter-terrorism and Security Bill currently before the U.K. parliament, has sparked a firestorm of outrage — and has sent the satirical #ToddlerTerror trending on Twitter — since it was reported over the weekend by the Telegraph.

The bill would call on school administrators to “make sure that staff have training that gives them the knowledge and confidence to identify children at risk of being drawn into terrorism and challenge extremist ideas which can be used to legitimize terrorism and are shared by terrorist groups.”

“They should know where and how to refer children and young people for further help,” the document said.

This is all being done to promote something called “British values,” which I think is a great idea but what is it exactly? Is the UK government going to start force feeding babies gin and tonic in their baby bottles?

“We are not expecting teachers and nursery workers to carry out unnecessary intrusion into family life, but we do expect them to take action when they observe behavior of concern. It is important that children are taught fundamental British values in an age-appropriate way,” a government spokesperson told the Daily Mail. (Emphasis mine)

This reminds me of that time Rep. Gohmert had the terrorist baby meltdown:

Infants are sometimes known to be terrors in their own right, but this diabolical plan involves terrorists sending pregnant women into the US to birth their America-hating spawns. The mothers and their kids then return home where, the congressman says, the children “could be raised and coddled as future terrorists”— and later, “twenty, thirty years down the road, they can be sent in to help destroy our way of life.”

In all seriousness, the proposed CTS 2014 law is highly problematic as it opens up the possibility of taking away people’s children. The rights organization CAGE “has released an advisory document that attempts to educate public bodies on the problems inherent within the draft legislation,”

Key to the draft Bill is the ability for the government to use multiple public bodies to make decisions about the lives of everyday people, based on spurious grounds. Of key concern is where Prevent officials cannot gain consent of parents, they will have the ability to use health and social services to potentially remove children from their homes in order to implement their strategies of ‘deradicalisation’.

This CTS bill is utter rubbish and a joke just as the UK’s whole Prevent policy has been from the start.