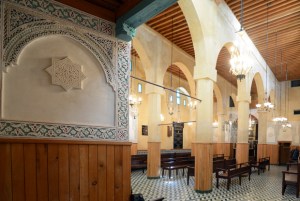 In the grand sanctuary of Manhattan’s Congregation Shearith Israel last Thursday, a group of more than 200 people gathered to hear from the leaders of Mimouna, a group of Moroccan Muslims dedicated to preserving Jewish Moroccan culture. This particular Jewish experience began with, of course, the food; a wide array of Moroccan kosher delicacies, including fig liqueur.

Afterwards, the crowd headed upstairs for remarks and a panel discussion. Moroccan Counsel General Mohammed Benabdeljalil kicked off the event by wishing everyone a belated “Shana Tova” and highlighted Moroccan efforts to preserve national Jewish landmarks.

Mimouna is an organization founded seven years ago by Elmehdi Boudra with the purpose of teaching young Muslim college students about the rich history of unity between Jewish and Muslim Moroccans. The organization, which has grown to include chapters on four college campuses in Morocco, is named after the holiday celebrated by Moroccan Jews the day after Passover, in which many families would invite their Muslim neighbors for a feast signifying the end of the holiday. The group now offers Hebrew classes on campuses, fosters interfaith dialogue amongst students, and holds a Moroccan Jewish day with authentic kosher cuisine, music, and a mini-museum of artifacts.

The evening served a dual purpose: attendees were able to learn about Mimouna and hear from its leaders, but the event was also a way to introduce Ashkenazi Jews to the history of the Sephardi community. Jason Guberman, the executive director of the American Sefardi Federation (and the project coordinator for Diarna, a group dedicated to documenting Jewish cultural sites throughout North Africa) said he hoped the event would “celebrate the beauty, complexity, and diversity of Sephardi history and culture, which is an often overlooked but integral part of the Jewish experience.”

The representatives from Mimouna spoke about why they’ve dedicated so much of their time to this particular cause. Vice president Laziza Dalil recounted the time was was the victim of verbal anti-Semitism, having been mistaken for a Sephardi Jew while traveling in Paris. “This place was much cleaner when the Germans were here,” she was told.

Boudra said he was inspired by the happy memories his grandmother shared with him about her childhood growing up in a Jewish neighborhood. Houda Ougaddoum, the group’s general secretary, said that though she had never met a Jew before joining Mimouna, she connected to Judaism through music.

Andrew Marcus, a Sephardi Jew, was inspired by the evening. “I knew of the rich heritage of Moroccan Jewry,” he said. “But I had no idea that there were Muslim groups working to educate the broader community about the unique history of Muslim-Jewish cooperation.”