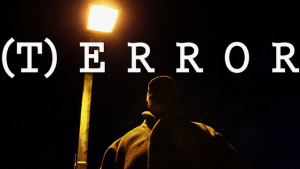 This type of harassment of American Muslims continues unabated. If the FBI can’t entrap you they will find other ways to ruin your life.

We spend the hour with an explosive new film that shines a bright light on the FBI’s shadowy use of informants in its counterterrorism sting operations. These undercover operatives are meant to root out would-be terrorists before they attack. Since 9/11, they have been used to prosecute at least 158 people. But critics argue they often target the wrong people, “including those with intellectual and mental disabilities, and the indigent.” “(T)ERROR” goes inside the world of a particular informant who has played a key role in several major terrorism cases. It does so while he is in the middle of carrying out his latest sting operation. It came together when two independent filmmakers gained unprecedented access to follow Saeed Torres, whose undercover name is “Shariff,” a 63-year-old former black revolutionary turned FBI informant, as he monitors a white Muslim convert named Khalifah al-Akili. Torres knew one of the directors, Lyric Cabral, and after he came out to her as an informant, he agreed to share his story, without informing his superiors. As the film unfolds, al-Akili begins to post on his Facebook page that he suspects the FBI is targeting him. The filmmakers used this an opportunity to approach him, and soon find themselves interviewing him at the same time they are also documenting “Shariff” monitoring him. During this time each man remains unaware that the filmmakers are talking to the other one. We get the rest of the story when we are joined by the filmmakers who co-directed “(T)ERROR,” Lyric R. Cabral and David Felix Sutcliffe, and play part of an interview with al-Akili from federal prison. Al-Akili was arrested just days after he emailed civil rights groups to say he believed he was the target of an FBI “entrapment” sting. He is now serving eight years in federal prison for illegally possessing a gun after having previous felony convictions for selling drugs. We are also joined by Steve Downs, executive director of the National Coalition to Protect Civil Freedoms. He works with Project SALAM, which published a report last year called “Inventing Terrorists: The Lawfare of Preemptive Prosecution.” He is also representing imprisoned Pakistani scientist Dr. Aafia Siddiqui. We are also joined by Marlene, the mother of Tarik Shah, who was arrested in 2005 after a joint FBI/NYPD sting operation that also involved Saeed “Shariff” Torres. She details in the film how Shah thought Shariff was his close friend, but he was actually an FBI informant.