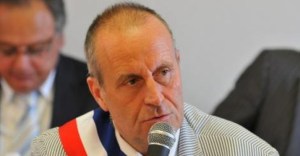 Does this even need any commentary? Meftah’s response seems perfect.:

After the mayor of a small French city called this week for France to ban Islam, at least one French Muslim political activist was rejoicing.

Mayor Robert Chardon of the Southern French city of Venelles tweeted multiple times on Thursday that “the religion of Islam will be banned in France on Oct. 18, 2027.”

“We are interpreting this as a great thing,” Meftah said. The comments, he added, show that “We, [French Muslims] are more and more visible. We have our mobilizations. We have our visions of what France should be.”

A spokesman for Chardon’s party, the center-right UMP of former French President Nicholas Sarkozy, told Al Jazeera that they are considering banning Chardon from the party.

“We condemn this but have yet to issue a formal comment on the issue,” UMP spokesman Pierre-Albert Mazars said. “We have begun procedures to look into removing [Chardon from the Party].”

Meftah said Chardon’s tweets reveal that French politics “are in a state of disarray” and undermines the legitimacy of Islamophobia as a political platform.

French politicians “see [Muslims] as a threat,” Meftah said, a sign that French Muslims are gaining power as a political entity.

Unlike in the past, when French Muslims were marginalized, they now have their own movements like the PIR and can push back against what Meftah calls the “white political establishment.”