By Dorado on May 19, 2015 in Loon People, Loon Politics, Loon Violence, Loon-at-large 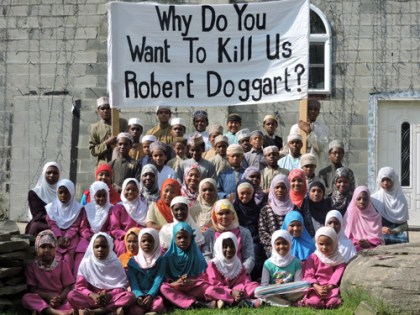 Islamophobia? What Islamophobia ? So where was he radicalized? I am sure we will have demands for condemnation from the media, and “experts” ready to support profiling white looking congressmen? I won’t hold my breath.

It has been nearly a month since his arrest with very little to no media reaction. Most of the media coverage has been in the last two days, that is nearly a month after his arrest and after the community issued a press release to raise awareness of being the targets of mass violence. Do we even need to imagine what would have happened if he was Muslim? The media firestorm and mass paranoia and Islamophobia would be pervasive.

The guy attempted to take armed militia to this Muslim community and commit terror. *He got a plea deal – 5 yrs max. https://t.co/uer6xD0wIc

HANCOCK, NY — FBI officials arrested and charged former 4th Congressional District candidate Robert R. Doggart of Signal Mountain, Tennessee in connection with a plot to kill residents and destroy the school and mosque of the Muslim village of Islamberg in Hancock, NY. The criminal complaint, filed in federal court April 20 in the U.S. District Court for the Eastern District of Tennessee, shows Doggart, age 63, planned to use an M4 rifle, explosives, machete and, if needed, snipers. He warned that those who joined his team should prepare for hand-to-hand combat with any residents encountered in his pursuit. The Muslims of America, Inc., the religious organization under threat, was notified of the danger and worked with state and federal officials to provide residents with round the clock security.Court records show that Doggart is a graduate of LaSalle University with both masters and doctorate degrees, and is an engineer by training and trade who ran for U.S. Representative in the 2014 election. Doggart’s plan to bomb Islamberg served to put the United States government on notice of his gripes. “I got this battalion that I command and they want to go take action. [They] are so sick and tired of the crap the government is pulling that we go take a small military installation or we go burn down a Muslim church…,” reported Doggart in a wire tapped telephone conversation.

The criminal affidavit also indicates that Doggart travelled to South Carolina and Texas to meet with members of so-called militia who shared a similar hatred of the U.S. and Muslims. This activity matches an increase in unwelcomed strangers visiting properties of The Muslims of America in South Carolina, Texas and other states. Interestingly, RSS Internet posts by Doggart on August 28, 2014, show he did in fact go to a TMOA location in Tennessee, “I traveled to Dover, Tennessee in Stewart County yesterday…”. On Saturday, May 9, 2015, Islamberg residents reported to authorities a suspicious pickup truck at the entrance to their property with an insignia on the back titled “10th  Mountain Division”. When approached, the vehicle drove off speedily. Doggart sold his evil scheme against Islamberg as a suicide mission where losing his life was worth the sacrifice, “If Hancock, NY happens, so be it. And I’ll do what I have to do.  If there’s a gunfight, well there’s a gunfight…if it’s necessary to die then that’s a good way to die.” The federal authorities monitored all of Doggart’s electronic and telephone communications and eventually arrested him on April 10 just as he was planning to go to New York to conduct his own “reconnaissance” of Islamberg. The complaint lists Doggart declarations about the “reconnaissance” trip wherein he says, “I’ll probably bring my M4 with me just in case”.

Members of The Muslims of America primarily consist of African American Muslims of the Sunni sect of Islam who are indigenous Americans with Islamic roots spanning four generations. The first generations were mainly converts from various branches of Christianity. Local law enforcement and neighbors have nothing negative to say about the Islamberg community. The Public Relations Director for The Muslims of America, Matthew Gardner vehemently expressed, “Doggart is an example of the results of unchecked and rampant Islamophobia which has spread lies for years about our peaceful community. This man plotted to mercilessly kill us, kill our children, and blow up our mosque and our school. We have sound reason to believe he has already visited our other locations around the U.S. What other murderous plans do he and his private militia have and where are his accomplices? All would agree, if a Muslim did this, the perpetrator would be immediately identified as a  terrorist then prosecuted to the fullest extent of the law. The examples are numerous. Therefore, we call on all branches of justice to see to it that this man is prosecuted for planning a heinous hate crime and terrorist act.”