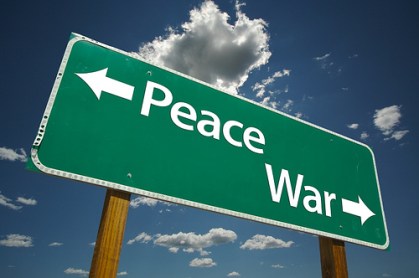 The failure of carrot and stick incentives

Since the advent of game theory, academics in political science and economics, along with policymakers and politicians have been and continue to be driven by an oversimplified view which holds individuals in a rational actor paradigm. Implying that, based on Rational Choice Theory (self explanatory), people do a cost-benefit analysis to maximize personal advantages when making a decision. An example of this is Mutually Assured Destruction (MAD) a concept developed primarily by John Von Neumann.

Recent evidence from cognitive science and neurology suggests that another agent of decision-making is driven by transcendental ideals, which can be called “sacred values,” meaning the values that are core to a person’s identity, emotions, their sense of religious identity, these values vary depending on the individuals and societies.

With the election victory of Netanyahu and his use of race baiting, as well as his comments reiterating denying the Palestinians a state, the belief has emerged that any settlement is dead and that the world is witnessing a new nadir in the occupation.

However, this dour state of affairs doesn’t have to be destiny, there is new evidence suggesting a path to peace can start with a simple acknowledgment of wrongs and a sincere apology.

So what are sacred values and why should they be recognized when dealing with conflicts like the Israeli occupation of Palestine?

Sacred Values override utilitarian (cost benefit) forms of reasoning in humans, and they lead to action (sometimes violent) when a person feels such values are under attack. People will be ready to defend them at all costs. Under these circumstances, no material incentive will change a person’s mind or at least trigger what may appear as rational behavior. Actually, it would have the opposite effect and backfire. In other words, everyone does not have a price or more accurately, a material price.

Scott Atran, a French and American anthropologist, said in my interview with him:

“Our behavioral and fMRI research in the lab and in conflict hotspots around the world indicate that SVs (sacred values) are cognitively processed as deontic rules (I have a moral obligation to do such and such regardless of the risks or rewards, costs or consequences) that drive actions independent, or all out of proportion, to likely, rationally expected outcomes.”

Conflicts with sacred values also are different from other group conflicts like in gangs where there is camaraderie but not commitment to a sacred cause, Atran in my interview continues.

“Gangs, like some combat groups, sometimes have strong links of camaraderie, but unlike committed combat groups (Special Forces, revolutionaries and insurgents) generally do not have commitment to a sacred cause. Commitment to comrades alone (brotherhoods/sisters in arms) can produce costly sacrifices, including fighting and dying beyond one’s own narrow self-interest at the moment, but there is strong empirical evidence that without commitment to a sacred moral cause such a group can be readily defeated by another with strong commitment to a sacred cause. Gangs and criminal organizations can do fairly well against police and armed forces motivated by typical reward structures, such as pay and promotion. But gangs as well as regular armies and police will generally lose against morally committed forces with up to an order of magnitude less firepower and manpower”

An Israel-Palestine relations experiment by Atran showed that more material incentives, like money, in the form of economic aid is offered can be counter productive in peace negotiations. Another study by Atran on Iran  also shows that sacred values can also be non-traditional like accruing nuclear power. This study showed that negative material incentives like sanctions can also have a similar effect and backfire.

In the experiment three offers were made: 1) the standard peace deal without a material incentive added, 2.) a peace offer plus a material incentive in the form of economic aid, 3.) A peace deal with no material incentive but the other side would recognize their values.  For Israelis it was the right for Israel to exist and why they came to Israel and for Palestinians it was recognition of the Nakba and the dispossession and suffering of the Palestinians accompanied by an apology. When economic aid was offered to Israeli settlers to give up land support for violence rose. When economic aid was offered to Palestinian refugees and Hamas supporters to give up the right of return support for violence likewise went up.

According to Atran’s studies something as simple as recognizing the other side’s Sacred Values would be much more beneficial and impactful. Such a recognition can come in the form of an apology (from Israelis) for Palestinian suffering resulting from the historical injustice of the Nakba, or the recognition of the right of Israel to exist (by Palestinians parties like Hamas). Neither of these actions holds any material value, they are only symbolic.

Atran describing his research in NYTimes op-ed How Words Could End a War states:

“All those surveyed responded to the same set of deals. First they would be given a straight-up offer in which each side would make difficult concessions in exchange for peace; next they were given a scenario in which their side was granted an additional material incentive; and last came a proposal in which the other side agreed to a symbolic sacrifice of one of its sacred values.”

“Indeed, across the political spectrum, almost everyone we surveyed rejected the initial solutions we offered — ideas that are accepted as common sense among most Westerners, like simply trading land for peace or accepting shared sovereignty over Jerusalem …  in general the greater the monetary incentive involved in the deal, the greater the disgust from respondents. Israelis and Palestinians alike often reacted as though we had asked them to sell their children. This strongly implies that using the standard approaches of “business-like negotiations” favored by Western diplomats will only backfire…. Many Westerners seem to ignore these clearly expressed “irrational” preferences, because in a sensible world they ought not to exist … Diplomats hope that peace and concrete progress on material and quality-of-life matters (electricity, water, agriculture, the economy and so on) will eventually make people forget the more heartfelt issues. ”

“Palestinian hard-liners were more willing to consider recognizing the right of Israel to exist if the Israelis simply offered an official apology for Palestinian suffering in the 1948 war. Similarly, Israeli respondents said they could live with a partition of Jerusalem and borders very close to those that existed before the 1967 war if Hamas and the other major Palestinian groups explicitly recognized Israel’s right to exist.” says Atran.

This study suggests that such symbolic gestures are likely to encourage support for peace. It doesn’t change their perception as to whether peace is more likely but it makes them more likely to support peace. The problem is getting people to make such symbolic concessions and this should be the challenge for our governments moving forward, as well as having an honest broker which western governments haven’t been. Ultimately what concessions, if any, Palestinians and Israelis make is up to them and should not be determined by us.

Another way we can get groups that are in conflict to stop fighting is to unite against a common enemy like another group that threatens both parties. Sacred values have applications to all types of other forms of conflict resolution, including current tensions between Iran and Western nations (or the fight against ISIS). Or even tensions between Israel and Iran who actually used to be quite friendly even during Khomeini regime (a common fore, the USSR, played a role in this until relations between Iran and Russia became less tense and more friendly).

Wouldn’t it to better to make people unite against abstract enemies, such as ending poverty? An example which seems on its face would be better than finding a third party for us to go to war with or would it be better to resolve conflicts with our current enemies?

The problem as Atran points out in my interview, is “For some, a ‘war on poverty’ or for the environment can be a sacred cause, but unless it generates the level of commitment and sacrifice, including fighting and dying if necessary, such causes cannot compete against those that do elicit such sacrifice.”

The actions of most governments and policy makers  seem to still be using outdated models that treat people as solely selfish rational actors who care primarily about themselves first. But we are presented with an alternative choice that recognizes peoples values, and can help us end conflicts in a much more cost effective way. Let us take the path where we recognize each others humanity and values and work towards a common good.

This article was edited with input from Mehdi