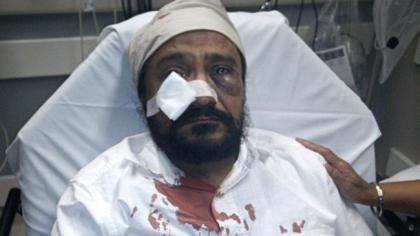 Islamophobia apologists will continue to say, “well, Islamophobia isn’t real because like, Muslims aren’t a race.” Clearly, those who continue to conflate Sikh turbans and brownness with Muslim haven’t gotten the memo.

A Darien man who was attacked Tuesday in what police are investigating as a possible hate crime has returned home from the hospital, his father said Thursday.

Police say they suspect a 17-year-old in the case of a Sikh man, Inderjit Singh Mukker, 53, a Darien resident and U.S. citizen, who was beaten and called a terrorist in Darien.

The incident took place about 5:15 p.m. Tuesday, when men in two vehicles became involved in “some type of traffic altercation,” Darien Police Chief Ernest Brown said. One driver pulled his car in front of the other man, who had stopped, and then got out and hit the other driver in the face, Brown said.

Officials with the Sikh Coalition, a Sikh advocacy group, said Mukker was driving to a grocery store on South Cass Avenue when another driver began yelling at him to “go back to your country,” and called him a “terrorist” and “Bin Laden.”

According to the coalition, Mukker pulled over near 69th and Cass to let the other vehicle pass, but the driver pulled in front of him and approached his car. The coalition said he then reached in and repeatedly punched Mukker in the face. The coalition said Mukker lost consciousness, was bleeding and had a broken cheekbone. He was taken to the hospital, where he got six stitches, the coalition reported.