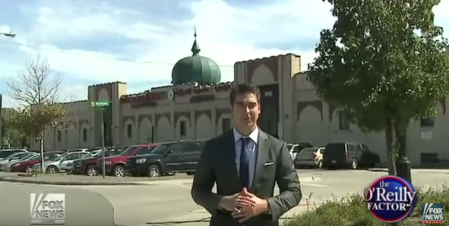 A screenshot from the Fox News video

In the imaginary world of Islamophobes certain regions of the USA, especially Dearborn, are under the control of Muslims who are stoning adulterers and enforcing classical Shari’ah law.

Here is Fox News doing what it does best, fear-mongering and fanning the flames of racism:

DEARBORN — A woman was stoned in Dearborn last year, an unidentified man said on Fox News’ top rated show. If you did not hear about the incident, it is because it never happened. The claim was one of many false allegations in a Fox report on Arabs and Muslims in the city.

The video segment aired on the O’Reilly Factor Monday night; a day later, close to a dozen calls for bombing Dearborn surfaced on Fox News’s Facebook page. City officials and community activists condemned the news network for its inaccurate portrayal of the city.

In the report, Watters interviews several Arab American residents asking short, insolentquestions with a broad smile, quickly moving the microphone, as to appear funny. His hard-hitting journalism included questions like: “Do you like Christmas?” “Which way is Mecca?” “Do you miss the desert?” However, the humorous tone turns serious when a White interviewee says that Dearborn keeps him on edge.

“Last year, there was a woman stoned,” the interviewee says. “Not too long ago, you know, I read there was an honor killing because a girl bought condoms.”

The segment shows the responses of four Arab Americans to a question about sharia law. Two residents express favorable views of the Islamic ethical, legal code; a hairdresser says that sharia law in Dearborn is a fabrication; and one interviewee says she does not know what sharia law is.

Despite the fact that all Arab Americans interviewed were nice to Watters and said they love the United States, the report seemed to solidify right wing extremists’ hatred for Dearborn.

The city of 98,000, which is home to a large Arab and Muslim population, has been the target of online attacks and fabrications, including manipulated images that show support to extremism, allegations of terrorist training camps and the claims of Muslim-ruled zones that the police cannot enter.

In the comment section on the O’Reilly Factor’s Facebook page, social media users expressed fear of the spread of Islam and advocated bombing Dearborn to drive the Muslims out of America.

“Pull out the good folks and bomb the rest,” wrote Facebook user Barry Griggs. Many echoed his comment— “Dear US Airforce Bomb Dearborn and make us safe.” “Bomb the place.” “Drop a bomb on them.” “Nuke them.”