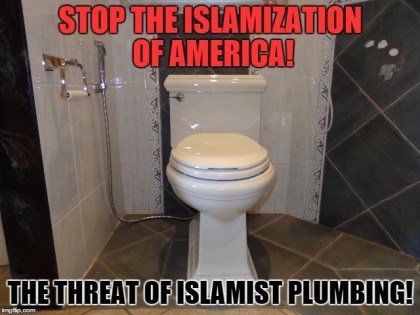 The Islamic transformation of America is near complete: all that is left is for the handheld bidets to be installed. That’s according to one of Fox News’ best anti-Islamist defender’s of Judeo-Christian civilization reporters, Todd Starnes.

A story about a Wichita, Kansas university chapel that removed its pews, (a move interpreted by one Christian student as a sinister Muslim plot conceived and led by a bunch of dhimmi Christians no less), led Starnes to pen the greatest article ever to save Judeo-Christian Western civilization AND at the same time save Americans the time and effort of cleaning their ass.

Starnes, expertly placed the Christian led move to remove the chapel’s pews in the broader context of that most pressing issue: the politically correct marginalization of Christianity and the march to inevitable and complete Islamization.

Starnes, writes warning us all of the impending future,

Muslims students have presented a petition calling for the university to install Islamic-friendly plumbing. They want handheld bidets installed in restrooms around campus.

This is what the Islamic transformation of a nation founded on Judeo-Christian values looks like, folks. The Christian faith is marginalized while the Islamic faith is given accommodation.

An abomination. Are Americans now going to be required to clean their butts? Sorry to be so crass here but what happened to the Constitutional right to walk around with dingleberries in your draws?

This is a rallying cry, we must take action against bidets and other forms of Islamist plumbing! Call your senator or local rep., start a petition! Also, don’t forget to thank that modern-day Charlemagne, Todd Starnes, who by the way also wants you to know that he wrote a book,

I documented this phenomenon in my latest book, “God Less America.” Check out the chapter titled, “One Nation Under Allah.”

These are critical times, even some of Fox News’ readers have had the wool pulled over their eyes. Commenter, Rufus Callahan even had the gall to claim, “i mean…handheld bidets would be nice…”