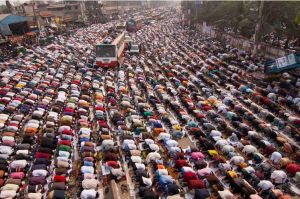 It’s happening everywhere, and Pamela Geller has the photographic evidence to prove it.

What is this worldwide atrocity that has Ms. Geller convinced Islamic Sharia is poised to take over Western cities, all across the globe?

That’s right. Muslims are gathering for congregational prayers in public spaces all over the world. Right out in the open. Stealth jihad is hiding in plain sight. 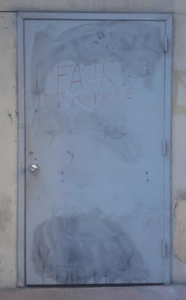 Last month Geller and her friends all across the looniverse celebrated their belated victory over the “Ground Zero Mosque.” Though it was neither at ground zero nor a mosque, a heated national debate erupted with some help from Geller and her fellow outrage peddlers in 2009. By late summer of 2010, after a series of media appearances and protests, polls showed a majority of the American public opposed the plan for a 15-story community center with a prayer space called Park51.

Despite opposition, the city approved the project. For a few years, Park51 was open to the public in the original space, but the grand plans that has sparked the controversy never materialized. Last month, Sharif El-Gamal, the chairman and CEO of Soho Properties, announced a new plan to turn the property into a 70-story residental tower offering luxury condos.

We did it! We the people. President Obama pushed for it, then-Mayor of NYC Michael Bloomberg supported it, the media actively campaigned for it — the elites in their increasingly fragile ivory towers stumped for the mosque.

But the people stood up and fought it and won.

It’s difficult to see how anti-Muslim agitators can take credit for this development. El-Gamal decided to build condos instead of the cultural center not because of pressure from Pamela Geller, Robert Spencer, and their ilk, but to take advantage of New York City’s luxury condo boom.

Nevertheless, it is a “victory” in the sense the “Ground Zero Mosque” was scrapped. One down, hundreds more to go.

In another recent article, Geller decries the “Obama Justice Department” suing an Illinois town for denying a rezoning application. If the application is approved, it will allow an existing office building to be converted into a what Geller describes as an “Islamic temple.” A move which she views, somehow, as a triumph of Islamic law over American law, as well as a step in the wrong direction:

…Obama’s lawless administration is imposing the Shariah nationwide, allowing the rampant construction of rabats and jihad recruitment centers at a time when we should be monitoring the mosques and restricting construction of Muslim Brotherhood beachheads and Islamic State madrassas. – Pamela Geller