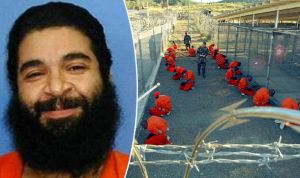 Shaker Aamer was finally freed from captivity in Guantanamo Bay and returned to his home in the UK. In Guantanamo he faced what amounted to illegal detention without due process; never being charged of a crime and formally cleared for release as early as 2007.

Aamer has recounted the torture that he was subjected to at the hands of interrogators and guards, also alleging that there were UK officials present at some of the torture sessions. Many individuals and organizations in the UK campaigned for him to be freed, including CAGE, Reprieve and Amnesty International.

While most of the UK has received news of Aamer’s release positively, neo-Cons and White supremacists such as Douglas Murray continue to loath Aamer as essentially a lying Muzzie terrorist who can’t be trusted. No mention of all the Guantanamo Bay guards and even prosecutors who corroborate that torture occurred at the prison camp.

In the following BBC segment, Moazzam Begg, a former Guantanamo detainee who endured torture himself, debates David Rivkin, legal counsel to the White House during the Bush-era who justified torture.