No words. Some things just speak for themselves

Editor’s note: In January 2016, a British Muslim mother was called in for a meeting by her 4 year-old son’s nursery school. The managers informed her that her little boy had been referred to a ‘de-radicalisation’ program after drawing what they alleged to be a ‘cooker bomb.’ Shocked by the news, the mother reached out for help on the private Facebook group, Muslim Mamas (see their public page here). Muslim Mamas is a close-knit group of some 9000 Muslim mothers from around the world. This mother now shares her story in her own words for the first time, though the story has been reported in The Guardian, The Independent, The Telegraph and other news outlets.

Some of you may have heard about the four year old boy, whose nursery wanted to send him to a deradicalisation programme for mispronouncing ‘cucumber’. Well, that was my son. I’ve been a member of Muslim Mamas for a while now and wanted to share my story with you all.

“He told us it was a cooker bomb”

One afternoon back in January 2016, when I dropped my little boy to nursery, the nursery manager and deputy manager called me into a side room and presented me with a document, together with some drawings that my son had drawn. I recognised the drawing straight away, as it was a recent one. It was of a man with a knife. My son had told me it was ‘daddy cutting a cucumber’ so I told the school managers this straight away. They were unconvinced.

“Well, that’s not what he said to us. He told us it was a cooker bomb,” the nursery manager replied.

I was blindsided by this. My son has never talked about bombs at home. I was so confused and upset. At that point, I didn’t immediately associate his pronunciation of cucumber as “cukkabum” with a “cooker bomb”. I’d never even heard of such a thing. 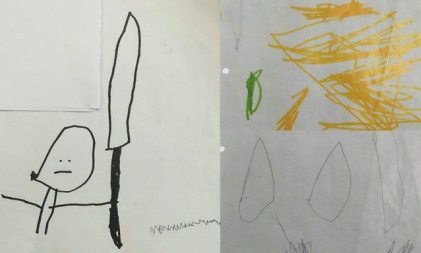 The school then showed me two other scribbles by my son. They said he talked about “pulling a string in Africa.” I explained that my neighbour’s cat used to visit our home frequently and my children often played with the cat by pulling a string. Sadly, the poor cat got run over and, not wanting upset them by telling them that he had died, I told the kids that the cat had gone to Africa to be with his family.

Again, the nursery manager dismissed my explanation and told me that they were referring me to Channel. I had no idea what Channel was, but assumed it was social services. I asked the manager if this was the case and she told me that yes, they did work together and that they would help me raise my children in the ‘right’ way. By this time I was in tears and pleaded with her not to refer me. But her reply did little to console me.

“Your kids might not be taken off you. You can prove yourself innocent,” she said.

I was distraught! I continued to plead with her. She asked me what he was watching on television and I told her that he liked his superheroes, Teenage Mutant Ninja Turtles and Power Rangers, but I would put a stop to this immediately if it would help (and I actually did go home and do this!). I even banned their Disney movies, as the nursery manager described one of my son’s drawings as that of a train blowing up. Incidentally, this is the opening scene in Toy Story 3.

Nothing was going to help me that day. She told me I’d already been referred and I had to “sign the referral form”, which I declined to do. I couldn’t – it just felt wrong to sign a document I did not agree with. My son, according to the nursery’s own description is a very ‘gentle’ child. I couldn’t accept the things that they were now suggesting about him.

I left the meeting and went home. My husband was away, so I telephoned him and explained the situation. He told me not to worry and reminded me that our boy always says “cukkabum” when he means “cucumber,” so obviously they’d misheard him. It then became clear to me what had happened.

I called the nursery manager immediately, with a renewed sense of hope and told her about his mispronunciation of the word “cucumber”. My son was still at the nursery and I told her to go and show him a cucumber so that it all becomes clear. However, the nursery manager was not willing to discuss things any further and told me that my son had already been “referred” and it was out of her hands. She then asked me again about signing the document and I once again refused. She informed me that she would “have to put down a reason”.