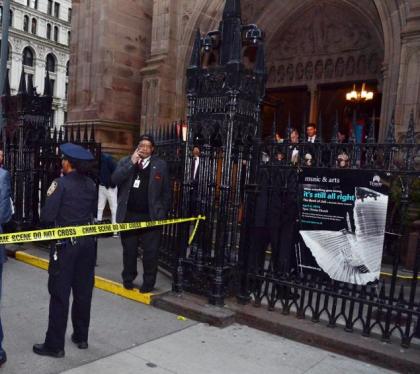 [Update: Woman admits she lied about being slashed in face, called ‘terrorist’ in lower Manhattan (h/t:Sam Seed). “It’s disgusting that she lied about it. Apologies to our readers.”]

Is this going to be the new normal in Trump’s America? Oh, and the police are not investigating this as a hate crime.

A Muslim woman walking down a Manhattan street during Thursday’s rush hour was slashed in the face by a man who called her a “terrorist,” police said.

The 20-year-old woman, a student at the private postsecondary school Make-up Designory, was taken to Bellevue Hospital with non-life threatening injuries, police said. The attack left a two-inch laceration on the left side of her face, police told CBS New York.

Police sources describe him as a white man wearing a black hat and a black jacket. He came up behind her, slashed a roughly two-inch gouge into her cheek, and ran off, police sources said.