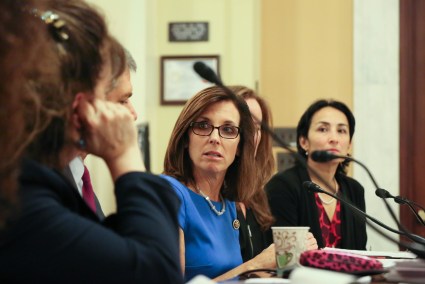 Alternet’s Grayzone project on Islamophobia has an excellent article by Maha Hilal on how the recent congressional panel on “women and terrorism puts women in the War on Terror’s crosshairs. It is a must read.

Islamophobia-enabler Asra Nomani was among those testifying at the hearings. Nomani, was there to put forward the discredited argument that increased outward religiosity, in the sense of starting to wear hijab is a sign of a trajectory toward terrorism and a potential threat indicator.

Next, Asra Nomani, a Muslim, provided personal anecdotes of her own family’s path to radicalization. She spoke about book after book that documented Muslim women victimized by the brutal patriarchal culture of the Islamic world, using the hijab, or headscarf, as a specific token through which their oppression is made visible. Nomani then constructed a scenario in which hijab serves as a warning sign of terrorist intentions.

“On the conveyor belt of ideas, what you end up with is Libya, ISIS putting up billboards telling you how thick it has to be,” said Nomani. “You end up with women beating women who do not comply with these regulations, you end up with mandatory laws that require that women live with this partition. Because hijab does not mean headscarf, it means separation.”

“It’s a very dangerous trajectory,” Nomani continued, “and it’s one in which we hear disturbing comments in which mothers in the Islamic state are forcing some of these sex slaves to have abortions so that their sons can continue to have sex with these sex slaves.

According to Nomani, putting on a headscarf can set women on a path that eventually leads to martyrdom. “It is a virtue then to kill,” she declared. “For all the reasons that have come before us on the conveyor belt, a woman is virtuous if she then becomes a shaheed, or a martyr.”