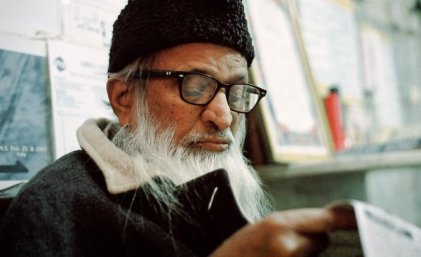 Abdul Sattar Edhi embodied the deep core of Islamic spirituality wedded to social activism. His efforts and developing institutes serving the most vulnerable and poor in Pakistani society, often neglected by the state was deserving of a Nobel Prize. His story is amazing.

Pakistan’s legendary philanthropist Abdul Sattar Edhi, who devoted his life to the poor and the destitute, died on Friday at a hospital in Karachi following a prolonged illness. He was 88.

Edhi’s family announced his death and his son, Faisal Edhi, asked all people to “pray for the departed soul” of his father.

Earlier in the day, the family had announced that Edhi’s condition deteriorated and that he was breathing with the help of a ventilator. Edhi had been undergoing treatment at the hospital for the past several weeks and his son said he was suffering from kidney- and sugar-related problems.

Edhi, known as “Angel of Mercy” for his social work that also won international acclaim, established a welfare foundation almost six decades ago that he oversaw together with his wife, Bilquis Edhi.

The foundation owns and runs Pakistan’s largest ambulance service, as well as nursing homes, orphanages, clinics and women’s shelters, along with rehabilitation centers and soup kitchens across the country.

Prime Minister Nawaz Sharif expressed his condolences and sorrow over Edhi’s passing and said he prayed that God will give the charity worker “the best place in paradise.”

Edhi was a “real gem and asset for Pakistan,” Sharif said in a statement. “We have lost a great servant of humanity. He was the real manifestation of love for those who were socially vulnerable, impoverished, helpless and poor.”

“This loss is irreparable for the people of Pakistan,” the prime minister added.

The funeral is due to take place Saturday in Karachi.