By Jerlerup on February 15, 2017 in Breitbart Watch, Loon at large, Loonwatch Updates 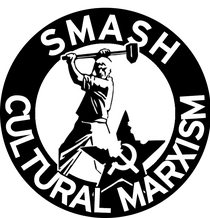 Islamophobes often use the word “Cultural Marxism.” If you believe or support the rights of Muslims or the rights of women, homosexuals or black people you are a cultural Marxist in the eyes of some. The key “think tank” behind the Trump administration, Steve Bannon’s Breitbart, often use the word Cultural Marxism. But what is its origin? The word cultural marxism was invented by Adolf Hitler and the Nazis in the early 1920’s and the present day Islamophobes have just “borrowed” it from the antisemities and Nazis.

Cultural Marxists are behind Muslim immigration they claim. It started with talk about the rights of minorities in the 60’s, they write:

Under this “cultural Marxism,” progressives believed they would aid racial and sexual minorities — and now Islamic minorities — by transferring cultural power and status from ordinary Americans, especially from white working-class Americans and away from individualistic-minded Christian churches…

are also encouraging the migration of devout Muslims and their theocratic political leaders into the United States.

And that leads to terrorism,

The resulting spike in jihad attacks…”

We are talking about REALLY scary things.

What is the origin of this mysterious group of alleged Marxists? Andrew Breitbart, The founder of Breitbart, traced the roots of present day cultural marxists to something called the Frankfurt school.

Why the Frankfurt School?  According to this myth cultural Marxism was created by Marxists in Germany in the 1920’s, the so called the Frankfurt School. They wanted to destroy Western civilization, it is claimed by introducing amorality, collectivism and atheism. The persons behind it were people like Georg Lukács, Karl Korsch, Karl August Wittfogel, Friedrich Pollock, Max Horkheimer, Theodor W. Adorno, Erich Fromm and Herbert Marcuse.

But Breitbart does not tell you that Adolf Hitler invented this myth that the Frankurt school was behind much of the evil on this planet.

The Nazis and “Cultural Bolsjevism”

The Nazis needed an enemy that was both Jewish and Marxist and that could be blamed for both the “rise in homosexuality” and the “degeneration of culture.” They found the enemy in the Frankfurt school. But they used the term “cultural Bolshevism,” not “cultural Marxisms.”

In 1935 Germany banned Jazz music in public, for example on German radio. The Swedish daily Svenska Dagbladet wrote on October 13, 1935 that the Nazis were clearing out “cultural Bolsjevism” from German culture.  “From this Saturday onwards all negroe-dance music is banned on German radio.” 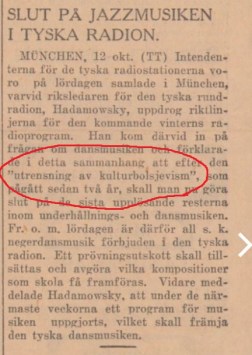 If you read the Nazi propaganda and media from the 1920s, 1930s and 1940s you often see the word “cultural Bolsjevism” and you can often see references to the “evil” Frankfurt School. The nazi bookburnings were a part of the campaign against “cultural Bolsjevism,” as well as the ban against Jazz music, the “degenerated music” (“entartete musik”). 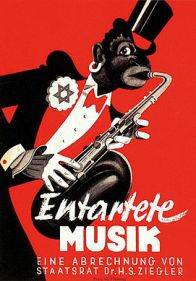 The Nazis claimed that the culture was being destroyed by a Jewish conspiracy. In this conspiracy the Jewish Marxists in the University of Frankfurt played a crucial role. The same myth that Breitbart and others still are spreading today, but with the claim that the present day followers of Frankfurt School Marxism are behind the “Muslim invasion”.

The Nazi press was filled with references to “cultural Bolsjevism.” Völkischer Beobachter, the main Nazi paper, wrote about the hated Jazz music in 1931. Here are two examples of how they used the word. First 17 december 1931: “Culturalbolshevistic triumph in Thuringen,” and the second on December 18, 1931: saying that 1931 is about “bourgeois-marxistic cultural Marxism.” 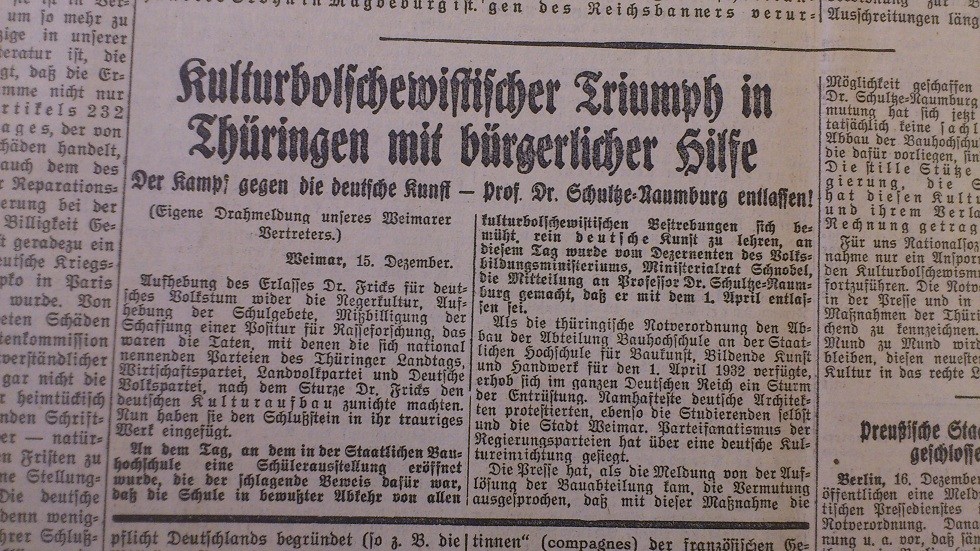 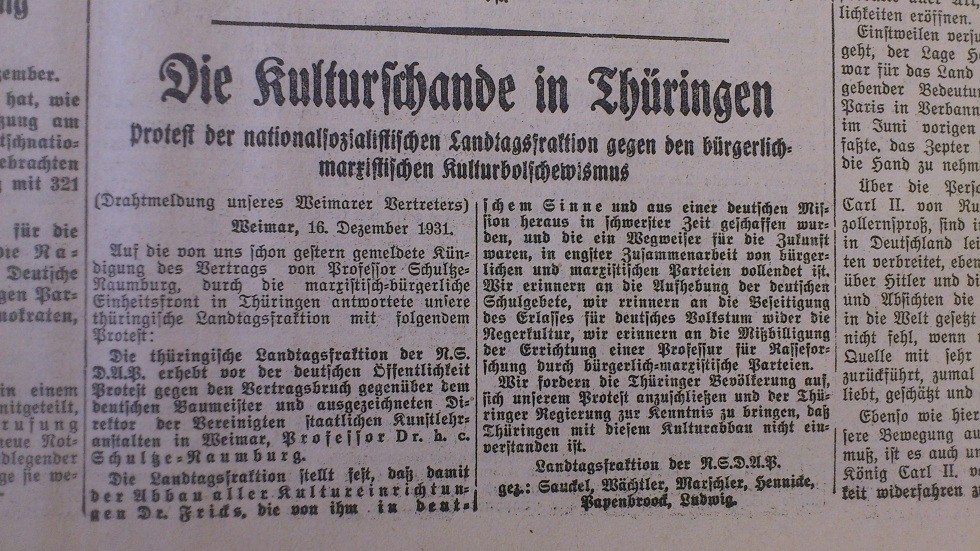 Many artists were kicked out of Germany by the Nazis in the first years of their reign. All of those where kicked out as a part of this campaign, citing “cultural Marxism” as the legal reason for it. Many artists where banned and not allowed to enter Germany. The Swedish Daily Dagens Nyheter reported on April 17, 1934 that the Hungarian composer Bela Bartok was blacklisted in Germany because he was viewed as a “cultural Bolshevist.” 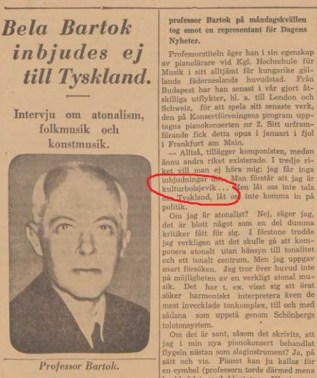 The originator of this antisemitic myth is unknown, but is probably Adolf Hitler.

What we know is that he writes about this alleged Jewish-Marxist conspiracy to corrupt morality and culture in his book Mein Kampf. Especially chapter 10 in the first book of Mein Kampf, published 1925.

“Even before the turn of the century an element began to intrude into our art which up to that time could be regarded as entirely foreign and unknown. To be sure, even in earlier times there were occasional aberrations of taste, but such cases were rather artistic derailments, to which posterity could attribute at least a certain historical value, than products no longer of an artistic degeneration, but of a spiritual degeneration that had reached the point of destroying the spirit. In them the political collapse, which later became more visible, was culturally indicated.

Once we pass the development of our cultural life in the last twenty-five years in review from this standpoint, we shall be horrified to see how far we are already engaged in this regression. Everywhere we encounter seeds which represent the beginnings of parasitic growths which must sooner or later be the ruin of our culture. In them, too, we can recognize the symptoms of decay of a slowly rotting world. Woe to the peoples who can no longer master this disease!”

These bolsjevistic conspirators wanted to destroy the culture by cutting off its connection to the past, Hitler claimed. The cultural elite that allowed the introduction of this degenerated art were cowards and traitors to Germany.

“And from this effort to remove the past from the eyes of the present, the evil intent of the apostles of the future could clearly and distinctly be seen. By this it should have been recognized that these were no new, even if false, cultural conceptions, but a process of destroying all culture, paving the way for a stultification of healthy artistic feeling: the spiritual preparation of political Bolshevism. For if the age of Pericles seems embodied in the Parthenon, the Bolshevistic present is embodied in a cubist monstrosity.

In this connection we must also point to the cowardice which here again was manifest in the section of our people which on the basis of its education and position should have been obligated to resist this cultural disgrace. But from pure fear of the clamor raised by the apostles of Bolshevistic art, who furiously attacked anyone who didn’t want to recognize the crown of creation in them and pilloried him as a backward philistine, they renounced all serious resistance and reconciled themselves to what seemed after all inevitable.”

The concept survived among the Nazis after World War II. As the word Marxist became more popular, the word changed so that in the 60s the Nazis talked about cultural Marxism instead. If you do some research you will find that it almost exclusively were the antisemites and Nazis that spread this concept, just 20 years ago. People like Lyndon LaRouch, and William Lind used it, getting it from Willis Carto that used it already in the 70s. The Nazi connections of Carto, like Francis Parker Yockey, are well documented.

Today the internet is flooded with antisemitic propaganda that claims that “Jews” are behind mass immigration, gay rights, interracial marriage and the Muslim invasion. Antisemitism is still a threat, a big threat, to society… 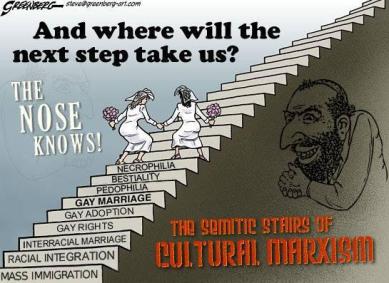 The myth of cultural Marxism is connected to the idea that the Jews are behind the so called Muslim invasion that I wrote about recently. 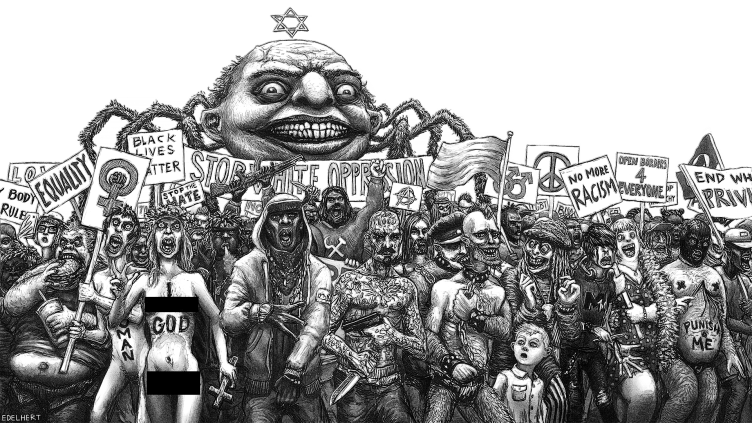 About 15 years ago the concept was picked up by the Islamophobes around the “counterjihad” movement. They claimed that they were not antisemites and downplayed criticism of the Jews (even if some, like Steve Bannon, still believe that “U.S. Jews” are a part of the grand conspiracy”).

The Norwegian terrorist Anders Breivik, that in 2011 murdered more than 80 people in an attempt to “stop the Islamization of Europe,” used the concept often. Breivik posted on the site Document.no in 2009.:

“How Can a democracy work When 98% of Western European journalist openly sympathize with “cultural Marxism”? These Deliberate “media black-outs” are authoritarian in nature.”

“Ideology of multiculturalism (cultural Marxism) is an anti-European hatideologi whose purpose is to destroy European culture, identity and Christianity in general.”

Thus: today the Muslims are the main targets of the “cultural Marxism” myths and exaggerations. The myth is exactly the same as in the 1920s: a global conspiracy. The attempt to destroy culture and morality by using “amoral” ideas like immigration, “Muslims,” homosexuals, free sex, democracy, civil rights, female rights, etc., etc.

The counterjihadists and Islamophobes, like Breitbart, are spreading a myth that Nazis created.

It is so sad to see that racist myths that until a few years ago only the Nazis were spreading, is being more and more accepted. As for Steve Bannon, the former head of Breitbart that now is the main advisor to President Trump: he too uses this word, to fight the Muslims and homosexuals and feminists that he believes are conspiring to destroy Western civilization.