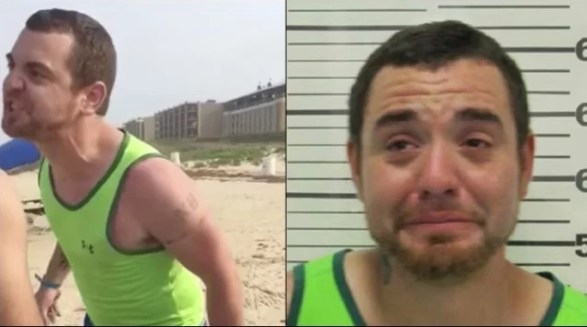 Alexander Jennes Downing, 35, was arrested May 3 and taken into custody by the South Padre Island Police for the reported public intoxication incident, which involved Downing shouting slurs and threats to a family nearby.

Downing, a Connecticut native, also made inappropriate gestures toward the group, who had children in their presence at the Texas beach.

A member of the victimized family, Noria Alward, recently uploaded the fiery footage to Youtube, which has since gone viral.

Downing can be hearing in the clip shouting out, “You’re a f—ing Muslim, motherf—er … You will never ever, ever, stop me, my Christianity, from rising above your Sharia law. Your Sharia law don’t mean s–t to me.”

“When he called it his country … It is my country too,” Ahmed told the news site.

“America is my country whether he likes it or not.”

Noria concluded in the YouTube post that the group would not be making future plans to visit the same resort.

“Overall we enjoyed the lovely island and we will definitely go back to South Padre again, we surely will never go back to Pearl South Padre hotel, Texas again,” she said.