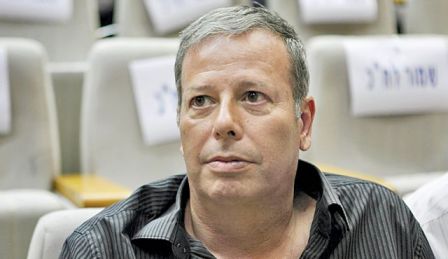 File this away under “What if this were a Muslim…?”  Shimon Gapso, mayor of the Israeli city of Upper Nazareth, has recently published an article for Ha’aretz in which he lays bare his racist and extremist religious ideology.  Gapso implicitly endorses a policy of ethnic cleansing, and defends his statements calling for the “Judaization” of his city.

The article is entitled “If you think I’m a racist, then Israel is a racist state.”  Well, as they say, if the shoe fits… Zionist ideology is, after all, rooted in the belief that the land of Palestine must be Jewish, an ideal that could/can only be fulfilled by replacing the indigenous Arab population with a Jewish one.  Israel is, as Mr. Gapso says, a racist state.

Gapso in the past has supported ethnic cleansing initiatives.  He has opposed the creation of a single Arab school, Muslim cemetery, or mosque in the city.  (I thought only Saudi Arabia had this problem?)

Here is Shimon Gapso’s article with my commentary inserted in between:

If you think I’m a racist, then Israel is a racist state

Upper Nazareth’s mayor answers detractors who say his reelection campaign calling for the mixed city to be ‘Jewish forever’ is racist.

Over the past few days, many people have been calling me a racist. Sometimes they also call me a Nazi, a bully or even Hitler. One need only look at the comments on Haaretz’s website to put me before a firing squad. What’s my crime? What act of bullying did I commit? I made a clear and unequivocal statement that Upper Nazareth was a Jewish city.

Yes, the comparison to Nazis and Hitler is acceptable here, despite what a distorted view of Godwin’s Law would claim.  Extremist Zionists routinely invoke Nazi and Hitler comparisons to Arab and Muslim leaders, but God forbid anyone say that of a Zionist.

Imagine if a Texan were to say that Texas ought to remain “white forever.”  This would be something only an Aryan racist would say–and nobody would think twice about likening this to the Nazis or Hitler.

One could claim that “white” is a race, while Jewish is not.  This is of course the game that is always played.  When convenient, Jewish is used as a race; when convenient, as a religion.  But, would anyone call it anything other than extremism of the worst sort for someone to claim that Georgia should remain “Christian forever”?

Yes — I’m not afraid to say it out loud, to write it and add my signature, or declare it in front of the cameras: Upper Nazareth is a Jewish city and it’s important that it remains so. If that makes me a racist, then I’m a proud offshoot of a glorious dynasty of “racists” that started with the “Covenant of the Pieces” [that God made with Abraham, recounted in Genesis 15:1–15] and the explicitly racist promise: “To your seed I have given this land” [Genesis 15:38].

When the Jewish people were about to return to their homeland after a long journey from slavery in Egypt, where they were enslaved for racist reasons, the God of Israel told Moses how to act upon conquering the land: he must cleanse the land of its current inhabitants. “But if you do not drive out the inhabitants of the land from before you, then those of them whom you allow to remain… as I thought to do to them, so will I do to you” [Numbers 33:55–56].

God gave them an explicit warning. Yes, the racist Joshua conquered the land in a racist manner. More than 3,000 years later, the Jewish people stood bruised and bleeding on the threshold of their land, seeking once again to take possession of it from the wild tribes that had seized the land in its absence. And then, an outbreak of racism flooded the country.

We are constantly reminded by the so-called “Islam experts” (who just happen to almost always be staunch pro-Israeli hawks) that it is only Muslims who take the violent parts of their scripture literally in the modern day and age.  Meanwhile, we are told that Jews and Christians don’t do this.  Pseudo-scholar Robert Spencer writes on p.31 of his book The Politically Incorrect Guide to Islam (and the Crusades):

When modern-day Jews and Christians read their Bibles, they simply don’t interpret the passages cited as exhorting them to violent actions against unbelievers.  This is due to the influence of centuries of interpretive traditions that have moved away from literalism regarding these passages.

In fact, I have cited studies that have shown that the majority of believers take the Bible to be literally true and the Word of God.  And, here we have an Israeli mayor referring to the bloodiest parts of the Bible in order to justify a policy of ethnic cleansing.  In previous articles, I have documented the Bible’s extensive justifications for ethnic cleansing, and Shimon Gapso is invoking these as a proof for a modern day policy of such.

This is the height of religious extremism.  It is a major problem facing the Jewish community today.  We are told by the pro-Israel “Islam experts” that Muslims have a problem of religious extremism–why aren’t moderate Muslims speaking out?, we are constantly asked.  But, how come we hardly ever hear these people asking why more Jewish people aren’t speaking out against Jewish extremism and supremacism in Israel?

To be clear, there are plenty of prominent Jews who are speaking out against Jewish extremism and supremacism.  The reactions to Gapso’s article are a proof of this.  But, just to set the record straight: the vast majority of Muslims on earth oppose the views of their religious extremists–and condemn terrorism in the name of Islam.  Yet, a very large proportion of the Jewish community seems to support Zionism and, by virtue of this, end up endorsing certain racist religious views in regard to the establishment of a Jewish state in a land that was, up until the turn of the century, inhabited primarily by non-Jews.

The point here is not to demonize the Jewish community.  The truth is that even though far too many Jews are Zionists, it is also a fact that the people who have done the most to stand up to extremist Zionism have in fact been Jews themselves.

The lesson to be learned here, however, is that it is unfair to single out the Muslim faith and community as the only one suffering from a religious extremism problem.

Back to Shimon Gapso’s article (with emphasis added):

The racist Theodor Herzl wrote “Der Judenstaat” (“The Jewish State,” not “The State of All Its Citizens”). Lord Balfour recommended the establishment of a national home for the Jewish people. David Ben-Gurion, Chaim Arlosoroff, Moshe Sharett and other racists established the Jewish Agency, and the racist UN decided to establish a Jewish state — in other words, a state for Jews. The racist Ben-Gurion announced the establishment of the Jewish State in the Land of Israel, and during the War of Independence even made sure to bring in hundreds of thousands of Jews and drive out hundreds of thousands of Arabs who had been living here — all to enable it to be founded with the desired racist character.

How refreshing it is to hear some cold, hard truth about the matter: the Jewish state engaged in the systematic ethnic cleansing of “hundreds of thousands of Arabs.”  This campaign–which continues in a modified form to this very day–was sustained by religious extremism.  What is interesting as well is that this absolutely absurd religious idea–that God gave the Jews the land of Israel–is championed even by many secular Jews.  Such is the endemic problem of this racist and extremist idea.

Since then, racially pure kibbutzim without a single Arab member and an army that protects a certain racial strain have been established, as have political parties that proudly bear racist names such as “Habayit Hayehudi” — “the Jewish home.” Even our racist national anthem ignores the existence of the Arab minority — in other words, the people Ben-Gurion did not manage to expel in the 1948 war. If not for all that “racism,” it’s doubtful we could live here, and doubtful that we could live at all.

In these times of hypocrisy and bleeding-heart sanctimoniousness, of the proliferation of flaky types who are disconnected from reality, in the relative security that causes us to forget the dangers we face, we can sit in north Tel Aviv, and cry “racism” to seem enlightened and good-hearted in our own eyes. We can be shocked at a mayor who prefers that his city, which is right next to the largest Arab city in Israel, retain a Jewish majority and not be swallowed up in the Arab area that surrounds it. There will not be a single Jew in the future Palestinian state, but that’s all right. That isn’t racism.

For the record, even Hamas has stated that in their “ideal Islamic state” Christians and Jews would be allowed to live in it.

Upper Nazareth is a Jewish city. Fewer than one-fifth of its inhabitants are Arab citizens, and they enjoy full municipal and national rights. Many of them are friends of mine, and I like and respect many of them.

This is of course the necessary disclaimer of “I have black friends, so I can’t possibly be racist against blacks.”

I could wish that Jews were treated the way the Arabs of Upper Nazareth are — not only those Jews who lived in Europe of times past, but also those who live in the Arab countries of today. If that were the case, perhaps we of Upper Nazareth would have no need to be “racists.”

Herein is revealed the fundamental flaw in Zionism–and what makes the comparisons to Nazism reasonable.  It was the Nazi viewpoint that Jews could not live in Europe with non-Jews that led to the Holocaust.  Instead of disagreeing with this baseless argument and calling for racial and religious harmony in Europe, Zionists argued that Jews could not ever hope to live with non-Jews in safety.  According to this defeatist view, Jews must segregate themselves into their own state, and that’s why Shimon Gapso has to Judaize his city (and all of Israel).  The only way Jews can be safe, according to the Bible’s violent verses and bigoted modern day Zionism, is to cleanse the land of Gentiles–whoever (supposedly) worships a different god, speaks a different language, or has a different religious or ethnic background.

Martin Luther King Jr. didn’t buy into the argument that blacks could not live with whites in peace and harmony.  In spite of the horrific violence levied against his people and his own person, Dr. King rejected Marcus Garvey’s “Back-to-Africa” ideology.  Such an ideology–which endorses the idea that a racial or religious group must live only among its own people–is a pernicious one.  It’s dangerous whether it is held by whites, blacks, Jews, Christians, or Muslims.  Instead of believing this segregationist idea, we must all learn to live together.

We must also learn not to unfairly single out one religion over another.  All religious traditions have their extremists.  This includes Judaism, Christianity, and Islam.  He is a fool whoever takes Shimon Gapso’s views and actions as being synonymous with Judaism and the Jewish community overall.  Likewise, so too are those fools who take this or that extremist Muslim’s views and actions as representative of Islam or the Muslim community at large.

Did you like this article?  Make sure to contribute to Danios’s IndieGoGo campaign.