By Mooneye on October 2, 2014 in Feature, Loon Media, Loon at large 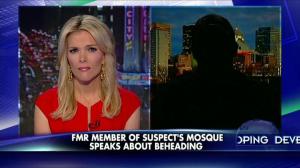 At Fox News, Islamophobia protrudes from the top, Roger Ailes, down to the bottom feeders like Eric Bolling, “The Five” crew, Megyn Kelly, etc. Remember, Ailes is the same guy who put “‘Fox News on lockdown’ after ‘observing a dark-skinned man in what Ailes perceived to be Muslim garb.’ He turned out to be a janitor.

The Kelly File, hosted by Megyn Kelly has a track record of demonizing Islam and Muslims so it’s unsurprising that she attempted to capitalize on the gruesome workplace murder in Oklahoma by Alton Nolen (Jah’keem Yisrael) to fan the flames of hate and suspicion against Muslims.

Nolen, recently converted to Islam and is said to have tattoos of Jesus Christ and other tattoos related to the Black Israelites, which indicates a propensity to experiment with religions. Instantly, questions have been raised about whether this may have been a “lone wolf attack,” however at the mosque Nolen frequented worshipers described him as “mentally disturbed.”

Many say Nolen was mentally disturbed and latched on to some extremist views.

While Fox has already proclaimed this a “terrorist attack,” law enforcement investigating the murder have not, considering the fact that Nolen’s attack came after he was fired from his job and stating they have “found no link to terrorism,” law enforcement is treating it as “workplace violence.”

It’s interesting to note, as Media Matters’ Eric Bohlert does that Fox News is picking and choosing its “terrorism” targets. In fact, there is an actual, clear cut, act of terrorism that is big news that Fox has barely reported,

Sounding the jihadist alarms, Fox News and the right-wing media are eager to label the ghastly crime an act of Islamic terror.

While that story continues to play out, it’s worth noting that an actual act of political terror remains in the news. It’s just not a priority for Fox.

On the night of September 16, 31-year-old marksman Eric Frein was allegedly laying in wait outside the Blooming Grove police barracks in northeastern Pennsylvania, preparing to assassinate state troopers. Shortly before 11 p.m., Bryon Dickson was shot and killed as he walked towards his patrol car. Moments later, as he approached the barracks to begin his overnight shift, trooper Alex Douglass was shot and seriously wounded by a bullet fired from a .308-caliber rifle.

In two weeks since the shooting, the Fox programs monitored by Nexis have mentioned Frein’s name in just six reports, and most of those were simply news updates that consisted of one or two sentences. Only one segment, which aired on On The Record With Greta Van Susteren, featured an extended conversation about the killing and the subsequent manhunt. In none of the six Fox reports however, were Frein’s vocal anti-government leanings mentioned, nor was there any suggestion Frein was a domestic terrorist.

Hosts Neil Cavuto, Bill O’Reilly, Megyn Kelly and Sean Hannity have all ignored the shocking cop-killer story. In general, Fox has provided almost no commentary, no context, and certainly no collective blame for the execution.

By contrast, in the days since the Oklahoma killing, Fox programs monitored by Nexis have flooded the zone with coverage of the beheading, totaling hours and hours of coverage.  Most of Fox’s reports offered extended, overheated commentary, and most of them dwelled on the fact the killing may have been an act of terror.

Cavuto, O’Reilly, Hannity, and Megyn Kelly have all hosted extensive coverage of the killing, with Kelly and Hannity devoting nearly their entire September 26 and September 29 programs to the Oklahoma story (“Terror In The Heartland“), allowing guests to make all kinds of unproven connections between the crime and to Islam and, of course, to politicize the tragic killing.

Kelly has stooped so low as to have a man on her show with the pseudonym of “Noor,” whose identity was hidden, claiming unverified and patently fabricated “insider knowledge” of the mosque that Nolen frequented.

“Noor” parroted, word for word, the usual line of conspiracy theories, slander and hate that we have come to expect from fringe idiots like Pamela Geller and Deacon Robert Spencer. For all we know “Noor” may actually be the loony Christian White supremacist extremist David Gaubatz or his son, both have a history of fake “conversions” so they can then afterwards claim to have “infiltrated” Muslim mosques. It’s a way for them to make a living on the Right-Wing fearmongering circuit, along the likes of fake ex-terrorists/Muslims such as Ergun Caner, Walid Shoebat, Kamal Saleem, etc.

In the Kelly File segment, “Noor” claims that members of the Oklahoma mosque are operating “stealth jihad.” That they will not promote terrorism in public but will in-doors, among congregants. “Noor” went on to forward the taqiyyah conspiracy theory, saying,

This is the equivalent to a blood libel being preached against Muslims in modern-day America, on a major national cable news network that has no scruples about airing false, slanderous and damaging statements regarding Islam and Muslims that have been proven to be lies and fabrications. In the past, Fox News has been implicated in inspiring hate crimes against Muslim Americans, this will only lead to more such crimes.

What should be done about Fox News?