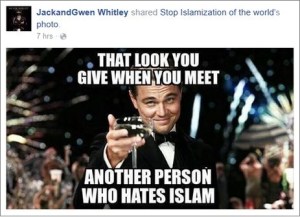 Was this man a raving Islamophobe before he found Geller and Spencer or was his nutty, fringe and warped version of Christianity triggered by his association with Geller and Spencer‘s SIOA? As important is the question of how in heck this guy ever came to be the chairman of a county Republican Party? I wondered if Big Stone County was in Michele Bachmann‘s neck of the woods, as that would explain a lot but it is not! Hopefully, the nearby Islamic Center of Willmar and its congregants will not be targeted because of this officials hate speech.

The chairman of a county Republican Party in Minnesota who believes that big government is actually a form of satanic “witchcraft” is not backing down from controversial comments he posted on his Facebook page about Muslims.

The comments were first reported by the Bluestem Prairie blog.

Whitley said Thursday that he would not apologize for his remarks. He said Muslims should either convert to Christianity or leave the United States.

“This is where I’m making my stand,” he wrote in another Facebook post. “Muslims inTwin Cities Area are calling for me to apologize for a comment I made on facebook about them being. parasites and we need to frag them .I will not apologize and I will not compromise .They either need to repent except Jesus Chist or leave the country .Any Muslims or group of Muslims who do not stand against Jihad Muslim terrorist are consider part and parcel with the Muslim terrorist. I was just contacted by a reporter from the Minnespolis Star Tribune who will be writing a article on their blog site if you care to follow this story.Bravery is contagious , I am not a coward are you? If Muslims think they can come to this country and dictate anything that makes them terrorist ! Lets see if your love for God and country,patriotism,extends any further than your finger tips on the keyboard. If you want to consider this a call to arms,then so be it .”

Whitley told the StarTribune that he didn’t like Muslims because Islam was a violent religion.

“I don’t really see much of Islam being peaceful at all,” he said. “Don’t come into this country, infiltrating this country with your terrorist activities and terrorist agendas and call it a ‘holy war.”

He also explained to the StarTribune that he doesn’t believe Muslims deserve First Amendment rights.

“Your association with those in your religion who have those terrorist activities, and your unwillingness to call them on the carpet for it? No, you no longer have the right to practice that religion if it infringes on the peace and the tranquility of this nation and the people around you. That nullifies your constitutional right to practice your freedom of religion.”

On his Facebook page, Whitley has expressed concern about witchcraft and Satanism.

“An oversized government will always be an immoral government, creating entities where none are needed, to virtually control every aspect of the lives of its citizens, for the ‘greater good’, thereby creating rebels of the ones who will not bow to these corrupt entities. This is also known as witchcraft.”

He said that Hollywood, the NFL, the NBA, televangelists, the Christian music industry, the health industry, and academics were all part of the “government of Satan,” which he claimed had infiltrated the Christian church.

“American Christians or should I say ‘Westernized Christians’ are absolutely caught in the trap that satan has laid for them, and they dont even know it because it feels so good,” he said in another post about the movie Noah.

Whitley also expressed his opposition to the “feminization and homosexualization of the church” in his Facebook writings, and said he didn’t donate money to missionaries “unless they prove to me they stand against abortion and homo’s.”