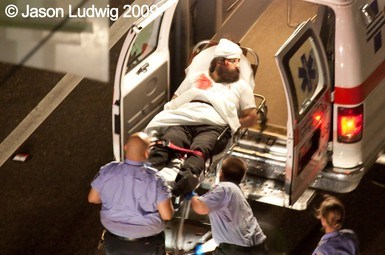 We reported this in November of last year; Jason D. Bruce, a Marine reservist, physically assaulted a Greek Orthodox priest, mistaking him for an Arab (and thus a terrorist, since we all know that Arab = terrorist).  Bruce hit the Muslim-looking man with a tire iron, chasing him for three blocks.  The Tampa Bay Times had reported:

TAMPA — Marine reservist Jasen Bruce was getting clothes out of the trunk of his car Monday evening when a bearded man in a robe approached him.

What the priest got instead, police say, was a tire iron to the head. Then he was chased for three blocks and pinned to the ground — as the Marine kept a 911 operator on the phone, saying he had captured a terrorist.

Can you imagine what would have happened if Bruce had done the same thing to a Jewish or black person?  The book would have been thrown at him.  Well, this was just a hate crime against a raghead. (Ok fine, he wasn’t really a raghead…but the point is that Bruce thought he was a raghead.)

Bruce was arrested on a charge of aggravated battery with a deadly weapon. The case gained national attention and drew strong reactions from the public, most of it negative toward Bruce.

On Tuesday, the Hillsborough State Attorney’s Office announced it will not pursue any criminal charges against him.

Maybe now Robert Spencer and Pamela Geller can honor James D. Bruce like they do other hate-mongers.