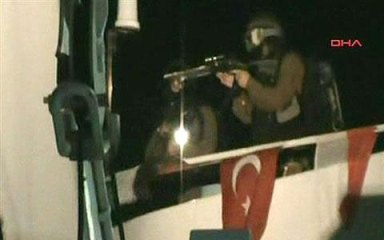 Israeli commandos illegally raid the Freedom Flotilla, ensuring that the Gazans are “put on a diet”

One of the common ways in which Islamophobia manifests itself in the public discourse is when far right wingers, extreme Zionists, and Islamophobes label a Muslim a “terrorist” in order to discredit that person’s legitimate criticisms.  Alternatively, and perhaps more commonly, these bigots don’t go that far but instead suffice themselves by claiming that the Muslim is “linked” to terrorists.  They will, for example, claim that so-and-so is associated with Hamas, Hezbollah, etc.  Very little proof is needed to make such claims; instead of providing actual evidence, the usual tactic is to provide tangential and circumstantial “proof” and to simply repeat the charge again and again.

If a lie is repeated enough, it begins to stick.  It is not dissimilar to what the right wing did to ACORN, when they launched spurious, sensationalist, and absolutely preposterous charges against the organization in order to demonize it.  Even though there was no basis for these allegations, ACORN was eventually forced to disband.  Similarly, countless Muslims and Islamic organizations have been discredited using this very same tactic.  At the very least, these Muslims and Islamic organizations are forced to dedicate all their (very limited) time and resources to countering the negative propaganda waged against them.

Islamophobes can use six degrees of separation to link virtually any Muslim to terrorists.  In fact, they even smeared poor Rima Fakih–winner of the Miss America contest–accusing her of being linked to Hezbollah.  If a Muslim-sounding name prevents you from being a bikini-clad stripper pole beauty pageant winner, then you can imagine how easy it is to smear Muslims who speak up against the far right wing, extremist Zionists, and Islamophobes–or those who would more daringly question the United States government…or in this case those who try to breach the illegal and inhumane Israeli blockade of Gaza.  Being a Muslim has become a huge liability, as you open yourself to all sorts of crazy accusations by the bigots.

So when the Freedom Flotilla, which had on board many Muslims, was illegally attacked by Israeli commandos, it was all too easy for the Israeli PR machine to claim that those on board were terrorists–or at least linked to terrorists.  Was there any evidence to support such a claim?  Of course not.  But such claims are taken seriously only because Islamophobia runs rampant.  If an Israeli says a Muslim is a terrorist, then it must be true, right?  Because Israelis are Jews, and Jews are the good guys.  Conversely, Muslims are terrorists–well, at least all terrorists are Muslims, right?  Such endemic bigotry is the equivalent of a white man assaulting a black guy, and then claiming in court–without any proof whatsoever–that the black guy was a criminal.  After all, black men are criminals, right?

The terrorist smear against the Freedom Flotilla was propagated all over the media, such that it became common for people to associate the people onboard the ships with terrorists.  Now, after the flotilla raid no longer dominates the headlines, the Israeli PR machine quietly withdraws its ill-founded and baseless claims. (The damage is already done after all.) The Israelis have confessed that they have no evidence to back up their allegation.  This is hardly surprising, considering that Israel tends to call whoever is killed by its missiles to be “terrorists.”  It’s quite clear that you don’t need evidence to accuse Muslims of terrorism.

The prevalence of Islamophobia in the U.S. can be gauged by the muted public reaction (or in this case, lack of reaction) after hearing of the brutal execution of a U.S. citizen by Israeli commandos.  Mr. Furqan Dogan was shot once in the chest and four times in the head at close range. Cenk Uygur writes:

The Israeli commandos that boarded the Free Gaza Flotilla shot Furkan Dogan once in the chest and four times in the head at close range. Was he still resisting after the third head shot? Did five different commandos happen to shoot him all at the same time in the middle of the night with stunning accuracy? No, someone shot Dogan at close range and did so enough times to make sure he was dead well after there might have been any resistance. That’s generally known as an execution.

Now, let’s be fair. Dogan was born in Troy, New York, but he moved to Turkey when he was young. Maybe that’s why the American government or media haven’t made a big deal out of it.

So, imagine if Hamas had boarded a ship in international waters and shot a Jewish American who had lived in Israel most of his life. Now imagine they shot him in the head four times. Does anyone really believe we would say that doesn’t really count because he’d been living in Israel too long? Does anyone believe we wouldn’t be apoplectic about that? And rightfully so.

Anybody know what we would call it if Hamas had shot an American citizen in the head? Yeah, you guessed it. Terrorism.

So, I’d like to ask the Obama administration – which one is it? Was his life more expendable because he was a) Turkish-American b) Muslim-American c) lived outside the country for awhile or d) because Israel killed him rather than another country?

I’m genuinely curious about that. The US government so far has reacted with what appears to be complete and utter indifference to the brutal slaying of one of its citizens. So, what was it that made this guy’s life irrelevant?

I’m about to have a son. He will be partly Turkish-American. Can he be executed by Israel or any other country? Will our country protect him? Will they consider him a real American? Does he count?

Is there any other country that also has immunity in killing US citizens? We’re apparently very good allies with Saudi Arabia. Do they get to execute of any our citizens? I’m just trying to figure out the ground rules here.

Does it still mean something to be an American?

Muslims can only be citizens of this country so long as they don’t criticize the U.S. government.  If they do that, they are told “go back to your own country” and even linked to terrorists.  Meanwhile, people like Glenn Greenwald, Norman Finkelstein, Amy Goodman, Noam Chomksy, etc. (all great people who I admire a lot) are immune from such attacks.  I’ve heard from Muslim Americans themselves who say that they appreciate the efforts of such non-Muslims because they themselves must be more constrained in what they say, for fear of being accused of disloyalty or of being linked to terrorism. In other words, Muslims might technically be Americans, but they are not real Americans.  Mr. Furqan Dogan doesn’t really count because he was a Muslim American, and so it cannot be said that a real American was killed.  And because he was a Muslim, it is very easy to dismiss him as a terrorist sympathizer; he probably had it coming.

When placed under journalistic scrutiny, the IDF is being forced to admit that its claims about the flotilla’s links to international terror are based on innuendo, not facts. On June 2, the IDF blasted out a press release to reporters and bloggers with the shocking headline: “Attackers of the IDF soldiers found to be Al Qaeda mercenaries.” The only supporting evidence offered in the release was a claim that the passengers “were equipped with bullet proof vests, night vision goggles, and weapons.” A screen capture of the press release is below: 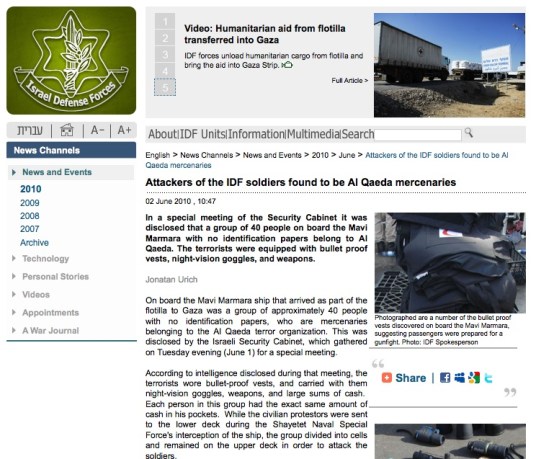 The IDF distributed this press release on June 2. The following day, it changed the headline, essentially retracting its lurid accusation.

Not content to believe that night vision goggles signal membership in Al Qaeda, reporter Lia Tarachansky of The Real News Network and I called the IDF press office to ask for more conclusive evidence. Tarachansky reached the IDF’s Israel desk, interviewing a spokesperson in Hebrew; I spoke with the North America desk, using English. We both received the same reply from Army spokespeople: “We don’t have any evidence. The press release was based on information from the [Israeli] National Security Council.” (The Israeli National Security Council is Netanyahu’s kitchen cabinet of advisors).

Today, the Israeli Army’s press office changed the headline of its press release (see below), basically retracting its claim about the flotilla’s Al Qaeda links. The new headline reads: “Attackers of the IDF Soldiers Found Without Identification Papers” (the top of the browser screen still contains the original headline about Al Qaeda). The more Israel’s claims about the flotilla’s terrorist links are challenged, the more they fall apart. 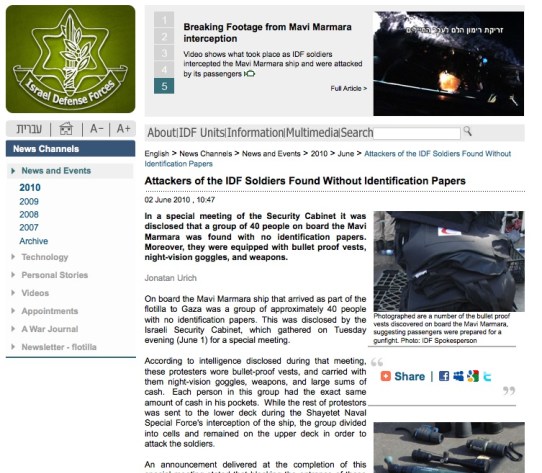 After admitting “there is no evidence” to back up its claim about the flotilla’s Qaeda links, the IDF quietly changed the headline of its press release.