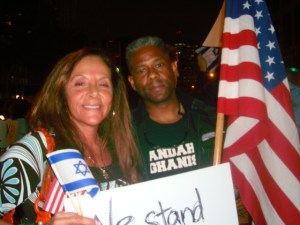 Islamophobes like to distance themselves from the actions of those they influence, but this story is a chilling reminder of the fall out of bigotry.

The FBI’s Domestic Terrorism Group in Miami arrested a Florida woman Tuesday in connection with the November 10 violent email threat that lead to a massive lockdown of all Broward County schools for much of a day.

In the complaint, the FBI says it traced the e-mail, sent to Kaufman vowing to use violence against schools and government buildings in Broward County to “make headlines” and “teach all the government hacks working there what the 2nd amendment is all about,” from Martinez’ computer at her home in New Port Richey, Florida. The FBI also traced a subsequent phone call to Kaufman’s radio station from Martinez’ cell phone.

Kaufman has told political rallies previously that “if ballots don’t work, bullets will,” and that individual citizens should become armed militias. The video clip of her rant has been broadcast widely. Kaufman claims her words were misrepresented, and that she was only trying to inspire people to vote.

But, the FBI says the e-mail, only portions of which have been released until now, began “dear ms. kaufman, i was so thrilled to see you speak in person for congressman elect west. i was especially exited to hear you encourage us to exercise our second amendment gun rights. i felt your plan to organize people with guns in the hills of Kentucky and else where was a great idea. i know that you know one election is not enough to take our country back from the illegal aliens, jews, muslims, and illuminati who are running the show. i am so glad you support people who think like me. I’m planning something big around a government building here in Broward County, maybe a post office, maybe even a school, i’m going to walk in and teach all the government hacks working there what the 2nd amendment is all about. Can I count on your help?”

The day before the incident, Kaufman was hired by newly-elected Congressman Allen West as Chief of Staff. Kaufman and West parted ways immediately after the incident.

After the e-mail was received by Kaufman, her radio station got a call from a woman claiming her husband was going to shoot up a school in Plantation, Florida. The woman asked the station to air a plea to stop him. Police were called and school officials eventually locked down the entire school district, affecting tens of thousands of school kids and their anxious parents.

The Criminal Complaint says the FBI and other law enforcement went to Martinez’ home in New Port Richey and questioned her outside her home. She refused to let authorities into her home or to see her computer. She told them she knew nothing about the threats. She conceded she owned a cell phone with the number in question, but that she had left it in a restroom during the time in question while she was at a New Port Richey café called Starz.

Martinez was not taken into custody at that point and, somehow, managed to leave her home without police noticing. The FBI reviewed security camera video at the Starz Café and did not see Martinez during the crucial time frame.

Martinez, 48, was arrested Tuesday in Los Angeles. She may also own a home in Santa Monica, CA.

The e-mail also said near the end “we’ll end this year of 2010 in a blaze of glory for sure. thanks for your support mrs kaufman.”