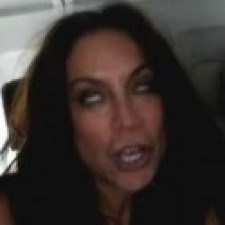 Update: It looks like the myth that Geller was pushing some months ago about Muslim hordes incinerating Nigerian Christians is resurfacing once again, this time on Facebook. Below is our post exposing the absurd falsity of attempting to pass the Congo gas tanker explosion as an example of Nigerian sectarianism.

We know about her vitriolic hate and twisting of truth quite well now. Her claims that Obama is the love child of Malcolm X, that he was born in Kenya, her calls to nuke Mecca, Medina, Tehran and to destroy the Golden Dome, her crusade against Campbell Soup’s “imminent Sharia’ take over,” etc.

We know her world is a twisted, vapid void in which honesty and intellect is frowned upon and viewed as frightening. Half the time I wonder if she isn’t asleep or on some hallucinogenic while typing away on her propaganda site, but this time she may have topped even her own crazy self.

Pamela is claiming in a blog titled, Nigeria: Muslim Hordes Mass Slaughter Christians that a gruesome picture is evidence of Muslim violence against Christians in Nigeria (be warned the picture is gruesome): 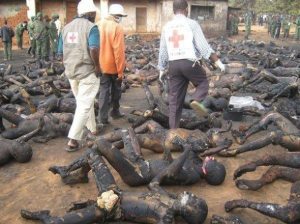 A terrible and horrifying picture indeed.

Pamela brags that she wrote about it “first” back on April 19, and then wonders “why” is America fighting in Libya to restore a “universal Caliphate?”

It turns out however that the above picture is not evidence of some “Muslim rampage” in Nigeria! The charred bodies are a tragic result of a tanker explosion in the CONGO!! A whole other country the last time I checked! Here is the evidence from Afrik.com (I give you the Google translation since it was originally in French):

The explosion, on July 3, a tanker in the town of Sange, South Kivu, Democratic Republic of Congo (DRC) has resulted in 235 deaths.

You will also see an interesting picture of Muslim UN soldiers, possibly from Pakistan helping to respond to the tragedy.

Here is a report from Reuters with some more pictures:

(Reuters) – At least 230 people were killed when a fuel tanker overturned and exploded in eastern Democratic Republic of Congo, unleashing a fire ball that tore through homes and cinemas packed with people watching World Cup soccer.

Officials said on Saturday the explosion late on Friday also injured 196 people, adding that the death toll could rise.

They described scenes of devastation in the town of Sange, where houses were burned and bodies littered the streets. Some people died while trying to steal fuel leaking from the tanker, but most were killed at home or watching World Cup soccer in cinemas.

Many of the bodies were charred beyond recognition.

United Nations helicopters began airlifting injured people to hospital, while Congo’s army, which lost a number of men in the blast, has sent soldiers in to help with the rescue.

“Our latest numbers are 230 dead and 196 injured,” Madnodje Mounoubai, a spokesman for the U.N. mission, said. Congo’s government also gave the same number of dead.

It was not immediately clear what caused the initial accident or later blast, but local people said the truck, which was part of a convoy, stopped when the road seemed to crumble, toppling the vehicle and spilling fuel. Fire then erupted.

“It’s a terrible scene. There are lots of dead bodies on the streets. The population is in terrible shock — no one is crying or speaking,” Jean-Claude Kibala, South Kivu’s vice governor, said from Sange, which is between the towns of Bukavu and Uvira.

“We are trying to see how we can coordinate with (the U.N.) to manage the situation and how to take the wounded to hospital,” he added.

Roads in the area are notoriously bad after years of war and neglect in the vast central African nation.

“Some people were killed trying to steal the fuel, but most of the deaths were of people who were indoors watching the (World Cup) match,” Cisambo said.

There have been numerous similar accidents across Africa, where crowds gather around fuel tankers involved in crashes, only for the tanker to explode.

Millions of football fans across Africa were watching Ghana, the continent’s last team in the World Cup, play Uruguay in the quarterfinals of the tournament on Friday evening.

For many, who have no electricity at home, makeshift cinema halls are the only option for watching the football.

“My children were watching the football match in the cinema and then they ran out to see the petrol,” said Kiza Ruvinira, who lost three children and his sister-in-law in the blast.

“I went out to see what happened and I found my three children’s bodies myself. I don’t know how to go on.”

Mubaya Mumasura also lost three family members: “I don’t know what to do with myself I am so sad. I want the government to assist all the victims and help us.”

Congo’s weak government has difficulty providing even the most basic services, so U.N. peacekeepers began airlifting some of the wounded to nearby hospitals and aid workers were called in to help with medical treatment.

“The national Red Cross is working on collecting the bodies and taking them to the morgue, but the priority is obviously to take the wounded to the hospital,” International Committee of the Red Cross (ICRC) coordinator Inah Kaloga told Reuters.”

Kaloga said aid workers were trying to identify bodies before they were buried, but many were completely charred.

“It’s a catastrophe,” said Captain Olivier Hamuli,” spokesman for Congo’s military operation in South Kivu, adding that 13 soldiers had been injured and another 10 were missing.

The Kenyan driver of the truck is being held by the police.

Alain Ilunga, deputy CEO of Congo’s storage and distribution company, which is already investigating the incident, said the truck was carrying 49,000 liters of petrol at the time. 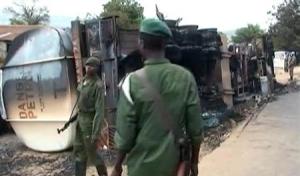 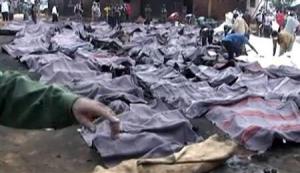 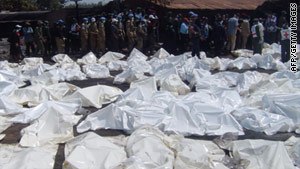 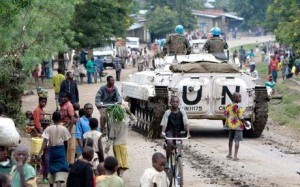