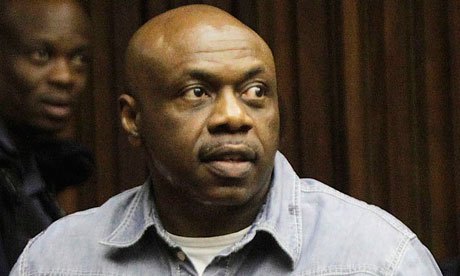 The Mend leader Henry Okah in court in Johannesburg. He was convicted of terrorism last month. Photograph: AP

Nigeria could face a battle between rival terrorist groups after Christian militants threatened to attack Muslim targets in response to bombings carried out by the Islamist group Boko Haram.

The Movement for the Emancipation of the Niger Delta (Mend), the umbrella body of armed groups in Nigeria’s oil-rich Niger Delta, said it would launch a new terror campaign “in defence of Christianity”.

“The bombings of mosques, hajj camps, Islamic institutions, large congregations in Islamic events and assassinations of clerics that propagate doctrines of hate will form the core mission of this crusade,” the Mend spokesman Jomo Gbomo said in an emailed statement.

The group appears to be responding to the ongoing attacks against churches and Christian populations in northern Nigeria, which some estimate have killed more than 1,000 people, including Christians and Muslims, in recent years.

The threat of a new round of violence, which Mend said would be codenamed Operation Barbarossa, comes a week after the Christian group claimed responsibility for the ambush of a boat in Bayelsa state, southern Nigeria, in which 13 police officers were killed.

The statement prompted concern in Nigeria, although there were questions about whether Mend had the capacity to launch widespread attacks on Muslim targets.

“We are on the cusp of something imaginable happening – there is a likelihood that we are going to experience some kind of Christian retaliatory killings for what’s happening in the north,” said Tolu Ogunlesi, a journalist and witness to attacks on Muslims in southern Nigeria.

“I’m just not confident it will be Mend that will do it. Just like Boko Haram, it is not a single organisation but different faces and shadows all using the same name.”

Mend has appeared increasingly fragmented in recent months. The group behind the current threat against Muslims is believed to comprise disgruntled militants who have turned against the amnesty agreed between Mend and the Nigerian government in 2009.

“Mend no longer exists in the way it has done in the past,” said Ken Henshaw from the Niger Delta-based group Social Action. “They key characters from Mend who really had the capacity to unleash mayhem have all accepted amnesty and handed in their arms. I can’t think of anyone left who can carry out the same level of violence.

“But I don’t think this threat should be handled lightly. At the moment Nigeria is so volatile, things are getting out of control,” Henshaw added. “Here is a group threatening to kill other people, it must be taken seriously.”

There have been a series of attacks or threats against Muslims by Christians in Nigeria in recent years. In 2011 a group called Akhwat Akwop – which it claimed was the Christian equivalent of the name Boko Haram – began distributing leaflets in northern Nigeria threatening terrorist attacks against Muslims, claiming it would emancipate Christians in the north.

In January there were attacks against Muslims in Rivers state in the Niger Delta, although Mend did not claim responsibility for those attacks.

“There is some precedent for attacks against Muslims in southern Nigeria,” said Adunola Abiola, founder of Think Security Africa. “And although there are real questions about whether Mend have the capability and the networks to carry out the attacks they are threatening now, it’s worth remembering that this is not just a group confined to the Niger Delta – they have operated in Lagos and Abuja before.”

Last month the Mend leader Henry Okah was sentenced to 24 years in jail after a South African court convicted him of terrorism over twin car bombings in Nigeria’s capital city, Abuja, in 2010.

There was speculation that the threat from Mend was at attempt to coerce the government into negotiating for Okah’s release. “The timing of this sentence suggests to me that this might be intended as some sort of proxy conflict with the federal government,” said Abiola. “But at this point in time and given the unpredictable turn of events in Nigeria, that anything is possible and they shouldn’t be ignored.”

Anti-Muslim, Boko Haram, Christian Terrorism, Crusade, Islamophobia, Jomo Gbomo, MEND, Movement for the Emancipation of the Niger Delta, Operation Barbarossa, Terrorism, What if they were Muslim